Ilya Kukulin awarded the Andrei Bely Prize in Russian Literature "The Machines of Noisy Time: How the Soviet Montage Became the Method of Unofficial Culture" 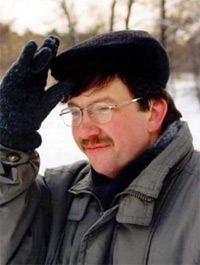 Ilya Kukulin, Instructor of Russian, was awarded the Andrei Bely Prize for "Scholarship in the Humanities" for his latest publication The Machines of Noisy Time: How the Soviet Montage Became the Method of Unofficial Culture. The Andrei Bely award is the oldest independent literary prize awarded in Russia. It was established in 1978 by the staff of Hours, the largest literary journal in Leningrad, to recognize excellence in three categories: prose, poetry, and theory.

Ilya Kukulin is an Associate Professor at the Department of Cultural Studies of the National Research University - Higher School of Economics (HSE, Moscow), Senior Researcher at the School of Advanced Studies in the Humanities, Russian Academy of National Economy and Public Administration (Moscow), and currently, Instructor of Russian at Washington and Lee University, Lexington, Virginia. His most recent book, Machines of the Noisy Time: How the Soviet Montage Became an Aesthetic Method of the Unofficial Culture (in Russian), came out in Moscow in 2015. He broadly publishes in fields ranging from the history of education in the 20th Century Eastern Europe to cultural practices of Russia's internal colonization; from contemporary Russian literature, especially poetry, to the history of nonconformist social thinking in 20th-century Russia and political discourses in contemporary Russian social media.