Our mission is to improve American Indian awareness and education on campus in order to provide a welcoming, vibrant, and culturally sensitive environment for W&L students and employees who identify as American Indian and those who support the issues faced by American Indians today.

We are excited to roll out our second year of events for the W&L and Rockbridge community! This article, W&L Announces Yearlong Native American Heritage Celebration, published in the September 24, 2020 Columns highlights some of the new initiatives our cohort has been working on the last year to create more awareness for Native people and cultures. We hope you will join us at our two October events (description below and poster attached). Please reach out to any member of the cohort with questions you may have!

Read More About the Cohort

Join us this Fall for the Gather Series events!

Wednesday, September 29, 2021 7:00 PM | Stackhouse Theater
In collaboration with the Shepherd Program, the History Department, and the Environmental Studies Program

Tuesday, October 5, 2021 5:30 PM | Zoom Discussion to be screened in Hillel
In collaboration with the Shepherd Program, the History Department, and the Environmental Studies Program

And more! Register and view the the full list of events here! 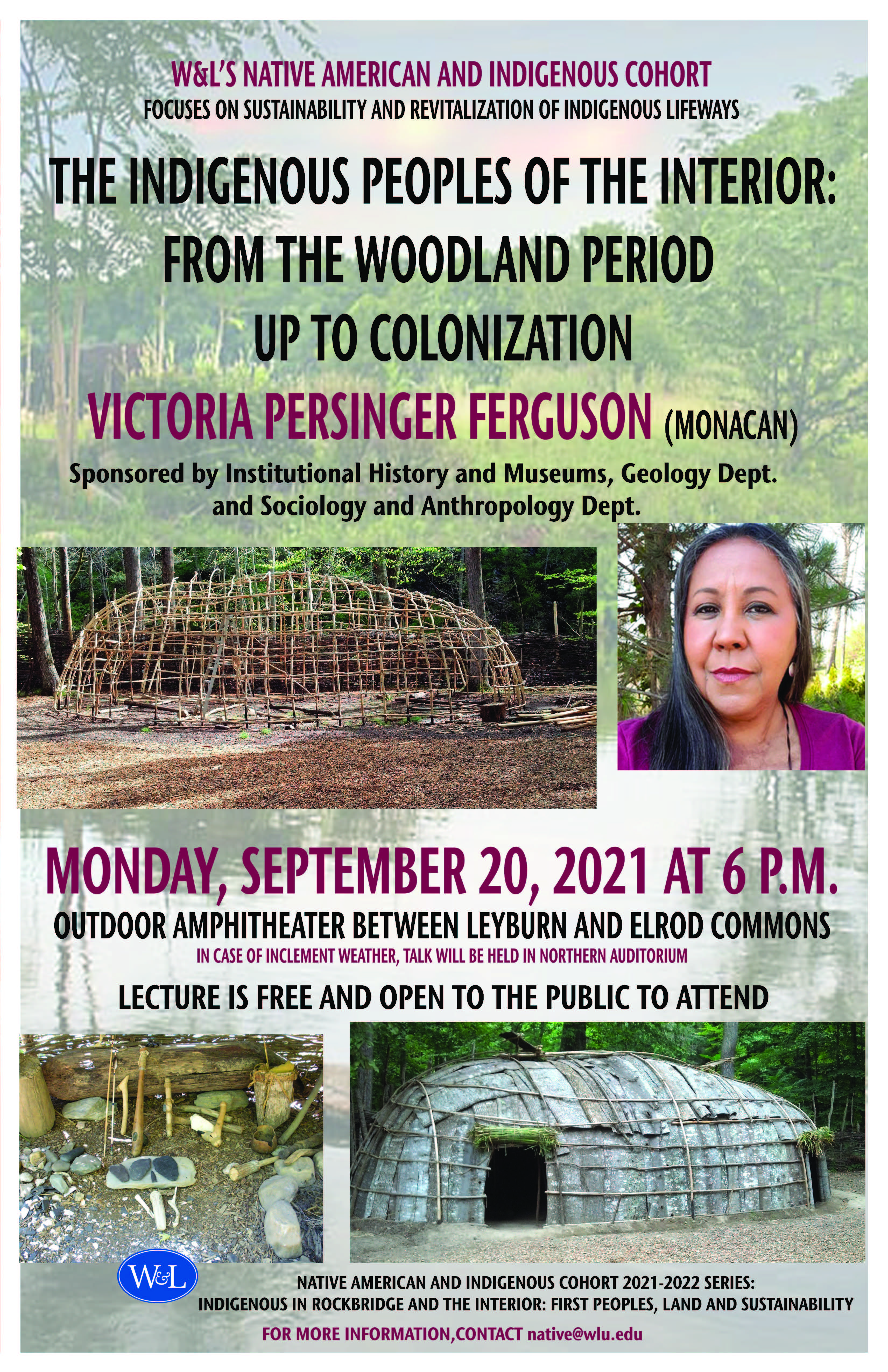 Indigenous Peoples of the Interior: From the Woodland Period up to Colonization

Monday, September 20, 2021 06:00 PM
Location: Ourdoor Amphitheather between Leyburn and Elrod Commons
Lecture is free and open to the public


W&L's Native American and Indigenous Cohort focuses on Sustainability and Revitalization of Indigenous Lifeways by presenting: "Indigenous Peoples of the Interior: from the Woodland Period up to Colonization" featuring Victoria Persinger Ferguson (Monacan). Sponsored by the Institutional History and Museums, Geology Department, and Sociology and Anthropology Department.

There is a long and fascinating history of the indigenous people who inhabited the land associated with the interior of Virginia along the James, Rappahannock, and Roanoke Rivers.   Very often we look at the history of Virginia Indians through the lens of the early European explorers and settlers, but rarely do we get to think about the activities of daily living through the indigenous eyes.  This presentation will shine a little light on these Eastern Siouan Speakers and discuss what life was like for them living in their towns during the Woodland period up through early colonization.

“How to Love the Burning World”

Washington and Lee University will host a public reading with Deborah Miranda, the Thomas H. Broadus Professor of English, on April 26 at 6 p.m. The title of her talk, “How to Love the Burning World,” is also the title of the first poem in her new book, “Altar for Broken Things,” which explores interlocking themes of sacrifice, willing and forced, and the sacred dimension of nature and the need for healing. The talk is free and open to the public to view online. Miranda’s poetry is informed by her ancestry and knowledge of the natural world. Often focused around gender, her poetry treats topics such as mothering and the ability to nurture in a violent world. 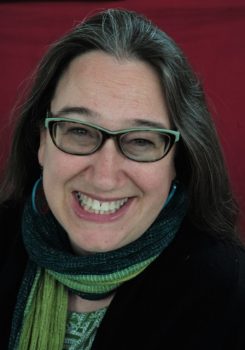 The Glasgow Endowment presents a reading by Glasgow distinguished writer-in-residence Heid E. Erdrich on Monday, February 8, 2021 at 6 p.m. This event is free and open to the public. 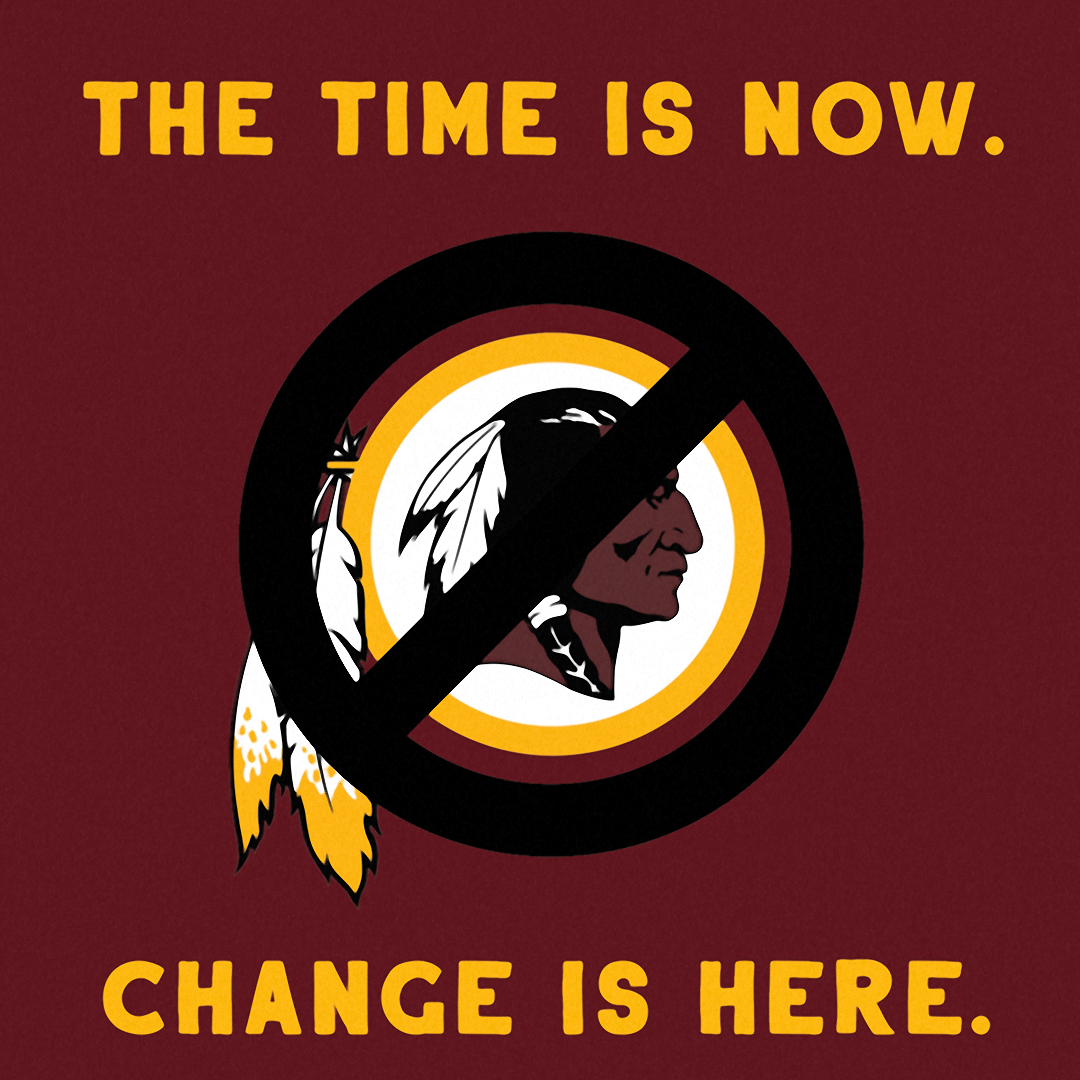 For over a century, professional, college, and high school teams have engaged in the practice of using the names and distorted images of American Indian peoples as team insignia or mascots without any regard for their racist and other derogatory implications. On February 1 at 7:00 pm, Washington and Lee's Native American Cohort will proudly host "An Evening with Charlene Teters (Spokane) and John Little (Standing Rock Sioux)".

Teters was the focus of a 1997 documentary In Whose Honor which presents a shattering portrait of the use and abuse of deeply significant cultural symbols by those who place no other value in them then as an opportunity for entertainment and merchandising. Little brings the story of the racism and American Indian mascots up to date with his new documentary More Than a Word. Their movie examines the history of the word "r*dskin" and its longtime use as the mascot for the NFL's Washington franchise. Teters and Little will share their experiences in the making of these two movies and their thoughts on the continuing battle for racial justice.   We encourage W&L community members to watch both movies on Kanopy - free of charge - in advance of the panel. View In Whose Honor here and More Than a Word here.

John Little is the Director of the Indian University of North America, a university program in South Dakota designed to help Native students succeed in higher education. He received his PhD in history from the University of Minnesota in May of 2020. His dissertation focused on Native American Vietnam veterans.

Charlene Teters is a "a Spokane, an artist, a mother, a grandmother, a wife, an activist for native rights, a college graduate, an academic Dean, a professor, a speaker, a voice, an American Indian, a human being. I live today. Holding an Associates degree in Fine Art from The Institute of American Indian Arts, Bachelors in Fine Art from The College of Santa Fe, Masters of Fine Art from the University of Illinois and an Honorary Doctorate in Fine Art from Mitchell College, New London Connecticut. My art, lecturing and teaching has centered around achieving a national shift in the perception of native people.

"Celebrating Beloved Lands" is a poetry reading for Tu b'Shevat hosted by W&L Hillel and the Native American Cohort.

Thursday, October 8, 2020 at 7:30pm
► Watch the Event Recording
The Shannon-Clark lecture and retreat are highlights of our academic year in the department. This year, our lecture and retreat will take place in a digital format. We are honored to welcome Dr. Craig Santos Perez, a Professor of English at the University of Hawai’i, Mānoa, who specializes in creative writing, ecopoetry, and Pacific literature. Dr. Perez is an indigenous Chamoru (Chamorro) from the Pacific Island of Guåhan (Guam). He is a poet, scholar, editor, publisher, essayist, critic, book reviewer, artist, environmentalist, and political activist. He is the co-founder of Ala Press, co-editor of five anthologies of Pacific literature and eco-literature, and the author of two spoken word poetry albums and five books of poetry. Find out more about Dr. Perez.

Thursday, October 1, 5:00 pm
► Listen to Event Recording
► Watch the Event Recording
Join us for a conversation with Historian and Professor, Colin G. Calloway. Washington and Lee University will host an evening event with the distinguished author from Dartmouth College to discuss his book The Indian World of George Washington. Washington's association with American Indians had a profound effect on the founding of this nation, the treaties with indigenous nations, and the land acquisition which played a part in the endowment Washington made for the establishment of this University.  Local historians will have the opportunity to talk with Mr. Calloway about the book and how Washington's relationship with various tribal nations helped to shape the United States. Dr. Calloway will be joined by panelists Victoria P. Ferguson (Monacan Indian Nation member), Tom Camden (Monacan descendant), Dr. Lynn Rainville, and Dr. Harvey Markowtiz of the Native American Cohort at Washington and Lee University.