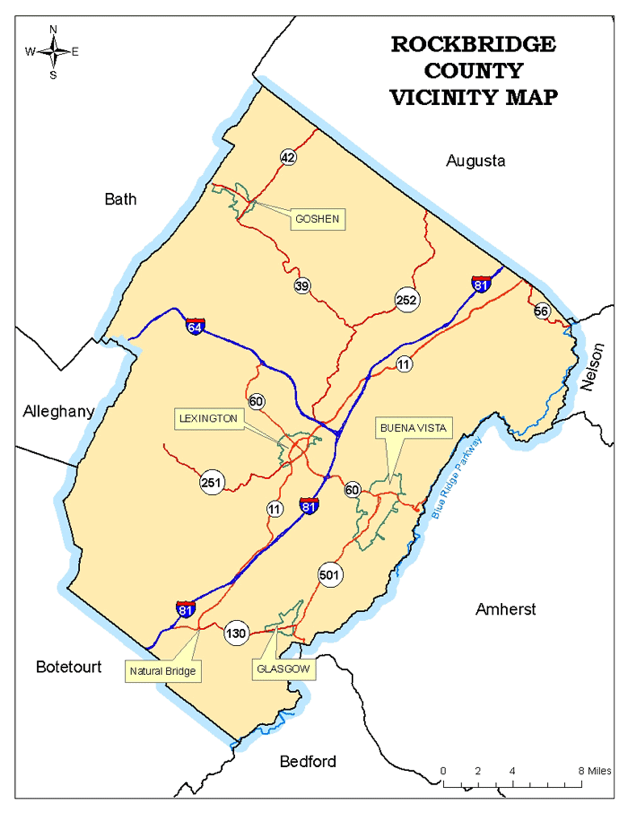 Rockbridge County is located in the beautiful Shenandoah Valley of West Central Virginia, nestled between the Allegheny Mountains to the west and the Blue Ridge Mountains to the east. Trisected by two major highways, Interstates 64 and 81, the area is easily accessible.

A 610 square mile region, the Rockbridge area consists of the two independent cities of Lexington (7,262 people) and Buena Vista (6,618 people), as well as Rockbridge County (22,354 people), which includes the two incorporated towns of Glasgow and Goshen.2 While the area is predominantly rural, it is within driving distance to more urban environments such as Roanoke (50 miles south), Richmond (135 miles east), and Washington, D.C. (180 miles northeast).3

Lexington was incorporated in 1778 and now serves as the governmental, service, retail, and educational center for the area.4 Tourists are often drawn to the city's historic ties and charming downtown. Buena Vista, located six miles east of Lexington, was incorporated as a town in 1890 and as a city in 1952.5 For several decades, Buena Vista served as the industrial and blue-collar manufacturing core of the region and is still home to some light industry today. Rockbridge County extends far beyond these two cities and is divided into five districts: Walkers Creek, South River, Kerr's Creek, Buffalo, and Natural Bridge.6 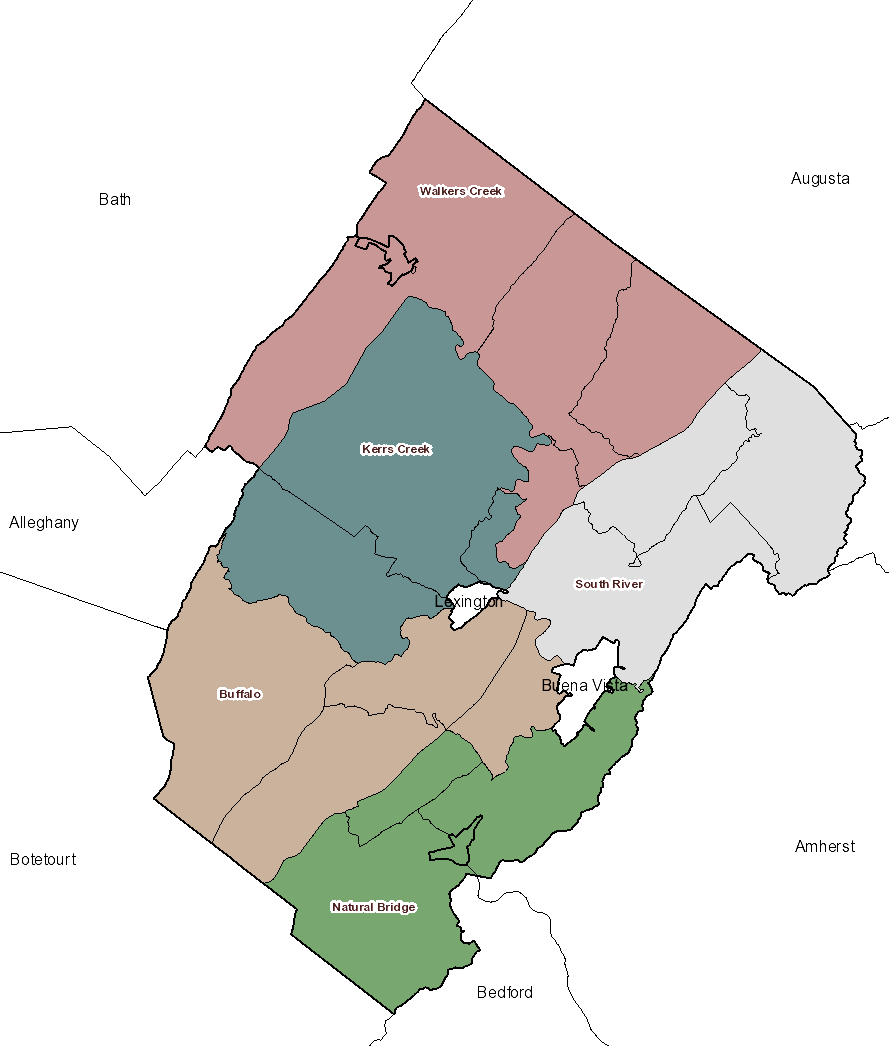 The Five Districts of the Rockbridge Area7

It is hard to put a single label on the Rockbridge area, a vibrant region of 36,586 people, including multi-generational families, students, farmers, artists, small business owners, members of the military, and retirees.8

"It's one of those amazing places...I can't tell you how many people I've met that have told me they could live anywhere else in the world, and they chose to live here." -Stephanie Wilkinson of Main Street Lexington9

Although the Rockbridge area's population is diverse in many respects, it is much more racially and ethnically homogenous than Virginia and the nation.10 There are few people in the Rockbridge area who speak a language other than English at home: only 6.4% of the population in Lexington, 3.5% in the County, and 3.3% in Buena Vista.11

While Rockbridge is home to many families who have lived in the area for generations, the inclusion of Washington and Lee and Virginia Military Institute students in Census data masks characteristics of permanent Lexington City residents.12

In 2013, the median age in Lexington was 22, much younger than that of Buena Vista, 37, and Rockbridge County, 48.13 Adults ages 18-64 account for 62% of the population in the Rockbridge area.14 The next largest age group is the elderly, age 65 and older, who comprise 21% of the population.15 It is apparent that the area's historic nature and natural beauty make it an ideal spot for retirement. Children under 18 comprise an estimated 17% of the population and typically attend one of the area's public schools.16

The Rockbridge area is home to regular performances by the Rockbridge Concert Theater Series, the Rockbridge Ballet, the Rockbridge Symphony, and the Rockbridge Area Youth Strings. Lime Kiln Theater and the Lenfest Center for the Arts both provide small scale and professional theater, dance, and music productions. Clark's Ole Time Music Center regularly hosts old-time mountain bluegrass music and dancing performances. Families enjoy Hull's Drive-In movie theatre, a warm-weather favorite that prides itself in being the nation's first community-owned, non-profit theater. Additionally, the area has nine art galleries and artisan shops that offer classes and display local art. World-renowned artists like photographer Sally Mann and painter Cy Twombly have resided in Rockbridge. To this end, Sally Mann continues to be an integral part of the Rockbridge scene. The Reeves Center and Watson Pavilion display paintings, Chinese porcelain, and European ceramics.17

The area is well known for its Civil War era history and has been inhabited by Robert E. Lee, Cyrus McCormick, Sam Houston, and Thomas "Stonewall" Jackson at various points in time.19 Accordingly, there are over 100 historical attractions and registered landmarks, including the Jacob Ruff House, the Cyrus McCormick Farm, Lee Chapel and Museum, Stonewall Jackson House and Cemetery, and the George C. Marshall Museum.20 The Rockbridge area is rich in natural assets, including the Natural Bridge of Virginia and the George Washington and Jefferson National Forests.22 Two rivers, the James and the Maury, run through the area while the Blue Ridge Parkway offers beautiful views from high altitude.23 Because of these natural features, Rockbridge is an excellent place for hiking, fishing, canoeing, kayaking, caving, mountain biking, and cross-country skiing. The Virginia Horse Center in Lexington is home to year-round horse sales and competitions.24 In addition, there are a total of 29 parks and playgrounds, 7 tennis courts, 12 campgrounds, 11 swimming pools, 18 picnic sites, and an 18-hole public golf course.25

Faith communities play a central role for many people, providing socialization, activities, and emergency relief. There are over fifty churches in the Rockbridge area, with the majority being Protestant or Roman Catholic. The closest synagogues and mosques require travel to Lynchburg, Staunton, Roanoke, or Harrisonburg.

4 "Lexington - Past and Present: A Unique and Special Community," (City of Lexington, Virginia), accessed June 27, 2016, http://lexingtonva.gov/DocumentCenter/Home/view/29.