According to a recent report for the FDA by the Committee on Statistics of the National Academies (CNSTAT), hunger refers to "a potential consequence of food insecurity that, because of prolonged, involuntary lack of food, results in discomfort, illness, weakness, or pain that goes beyond the usual uneasy sensation."1
Households with low food security live with "reduced quality, variety, or desirability of diet. [There is] little or no indication of reduced food intake."2 Households with very low food security are characterized by "multiple indications of disrupted eating patterns and reduced food intake."3

Experts estimate that 15.4% of Americans in 2014 were food-insecure,4 though the rate for Virginia was 11.8%.5 In the Rockbridge area specifically, 4,380 people were food insecure. Though it is worth noting that the estimate for Lexington City could be artificially skewed due to its deflated income figures, the percentage of individuals by locality estimated to have experienced any level of food insecurity in 2014 are as follows:

Food insecurity can have many causes, but living in a food desert may be a contributing factor. These areas are identified as meeting thresholds for being low-income AND not having ready access to healthy fresh and affordable food.7

Figure 11: Criteria for determining an area a Food Desert8

Although the Rockbridge area is heavily agricultural and has many farms, a substantial amount of residents live in food deserts, as defined by the U.S. Department of Agriculture, and are at greater risk for high intake of highly processed foods at convenience stores and fast food restaurants. The full-service supermarkets are heavily concentrated in the main commercial corridors of Lexington and Buena Vista, making it hard for County residents to access them.

Children ages 0-3 who experience food insecurity, are more likely to be sick than children in food-secure families, and have a one-third higher chance of being hospitalized.9 Because processed food is cheaper and more easily accessible than nutrient-dense, healthy foods, food-insecure families are more likely to have weight problems that may lead to obesity. This growing disease impacts 31% of Rockbridge adults.10 Obesity is correlated with many adverse health problems that hinder earning potential, and shorten life span, including hypertension, cardiovascular disease, asthma, and joint degeneration. Diabetes affects 10.2% of adults in Rockbridge, which is higher than the national rate of 8.1%.11 In addition, poor nutrition among children is also associated with decreased academic performance and behavioral problems, as well as contributing to poorer mental health.12

Multiple services are available to those who cannot purchase adequate quantities of nutritious food, including national and local food safety nets.

The Supplemental Nutrition Assistance Program (SNAP), formerly known as Food Stamps, offers nutrition assistance to millions of individuals and families in the United States. People with a gross monthly income below 130% of the FPL are eligible for these benefits,13 which come in the form of credits on an Electronic Benefits Transfer card that allows them to pay for food products.14 Cards are reloaded the first week of the month,15 a great supplement to 6,176 recipients in the greater Rockbridge area.16 Supplemental foods, nutrition education, health care referrals, and support are provided to pregnant women, their infants, and children through the Women, Infants and Children (WIC) program.17

The National School Lunch Program provides free school lunches to families living below 130% of the FPL, and reduced price lunches (students pay less than 40 cents) to those falling between 130% and 185% of the FPL.18 Figure 12 shows the percentage of students who were eligible for these programs in 2015, identifying Buena Vista as the area with most need.19

Located in Lexington, the Rockbridge Area Relief Association (RARA) provides emergency relief to community members when other resources have been exhausted. In 2013, they provided supplemental food to 17,626 individuals.20 Food banks offer supplemental nutrition assistance to those in need. Aside from the RARA Food Pantry, which offers food aid through a self-serve system to those eligible,21 other food banks in the area exist in Buena Vista and Glasgow.

The Campus Kitchen at Washington and Lee also aids in hunger relief and promotes nutrition by creating balanced meals out of food that would otherwise go to waste and then delivering them to various organizations around the area. The newly launched CKWL Mobile Food Pantry also makes monthly deliveries of groceries in Buena Vista and Goshen, while the Backpack Program provides weekly assistance to all of the area's elementary schools.22

The cost of housing can place a great burden on low-income families and limit how their remaining resources are used. The Rockbridge area has a higher homeownership rate than that of both Virginia and the country. In 2010, 67.7% of housing units in the Rockbridge area were owner-occupied.23 Of the three localities, the County has the highest proportion of owner-occupied housing in 2014.24 Lexington has the highest proportion of renter-occupied units inhabited by non-family occupants, which is likely due to a high concentration of college students who rent off-campus homes and apartments.25 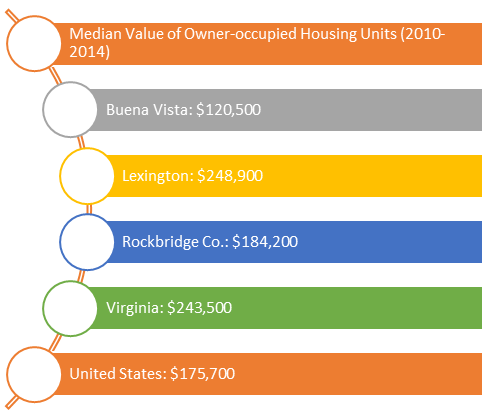 Housing costs are especially important for many families because they are often the highest monthly expense for the household. The median values of houses in the Rockbridge County and Buena Vista are less than those of Virginia and Lexington City.27 However, as specified by a 2012 Rockbridge housing study, "1,492 low-income households earning sixty percent or less of area median income pay more than thirty percent of their income toward housing costs."28

In order to address the need for affordable rental housing, the Rockbridge Area provides subsidized project-based units in the form of Housing Choice Vouchers (also known as Section 8 vouchers) and low rent private units. Although each serves a different type of population and has certain income-based requirements, these programs work together to supply affordable rental housing for people with limited financial resources. As stated by the 2012 Rockbridge Housing Study,

In the area, there are several project-based units. All of these units are subsidized by the Virginia Housing Development Authority and all tenants pay no more than 30% of their income towards rent. All these families are considered "very low income," earning no more than $27,750 for a family of four.29

Housing Choice Vouchers assist families by subsidizing the difference between Fair Market Rent as determined by the Department of Housing and Urban Development (HUD) and thirty percent of the household income. Clients live in private housing instead of public units. Although the program distributes 157 vouchers throughout the area, demand far surpasses the supply.30 Landlords in the region are more willing to accept these vouchers than in other areas, likely due to the comparatively inflated cost of housing in the region.31

Both the cost and quality of housing are determinants of an individual's social and economic wellbeing. Community leaders have described the quality of current housing stock in the Rockbridge area as "very poor." As stated in the Rockbridge Poverty Assessment 2008, "Some residential properties lack adequate plumbing and kitchen facilities."32 However, the recent Rockbridge Assessment 2016 noted a decreasing number of homes that lack these assets.33 Substandard housing can both cause and worsen illness. In the case of a serious problem, like poisoning from lead in house paint or soil, developmental trajectories for individuals are stunted.34 Condemned housing not meant for human habitation can also greatly harm an individual's wellbeing physically, mentally, and socially. For those that must temporarily seek shelter with family and friends, social stressors may compound these health risks.35

A 2015 community-based research report identified that homelessness does exist in Rockbridge and its nature is markedly different from urban homelessness.36 In rural settings like Rockbridge, homeless shelters are rare. Those that exist often target a very particular population. For example, in Lexington, Project Horizon provides a temporary shelter for victims of domestic and/or sexual violence. Due to a lack of shelters, homeless and housing-insecure individuals and families are sometimes at risk of living in extreme conditions, such as condemned housing, vehicles, outdoor/exposed dwellings like tents, or "doubling up" with family members.37

12 Cook and Jeng, Child Food Insecurity: The Economic Impact on Our Nation, 2.

33 Chris Ahn and Alice Moore, Rockbridge Assessment 2016, (The Shepherd Program for the Interdisciplinary Study of Poverty and Human Capability, June 2016), 35.