Respondents to a 2016 survey identified employment as the most problematic issue impacting the Rockbridge area.1 Rockbridge County has a 4.0% unemployment rate, which is higher than the state average of 3.8%,2 but lower than the 4.7% national rate as of May 2016.3 Consistent with national trends, the graph above shows that the unemployment rate is decreasing in Lexington, Buena Vista, and Rockbridge County, likely due to the nationwide economic recovery.4

While unemployment is the standard measure for assessing the economic well-being of a given area, underemployment and the prevalence of poorly-paying jobs can be equally revealing about the area's labor market. In the Rockbridge area, nearly 1,791 people are underemployed, which means that workers with high skill levels are not reaching their full economic potential because they work in low-skill or low-paying jobs.5

Locally, those without higher education often have difficulty in finding employment. A few decades ago, the manufacturing sector provided many people with well-paying, blue-collar jobs in the Rockbridge area. Today, this sector only makes up 14% of existing jobs.6 Among the other employment sectors that offer the largest number of employment opportunities are government (20.2%), retail (12.0%), healthcare (10.0%), and education, though the figures for the latter are undisclosed.7

In Virginia, the minimum wage of $7.25 an hour puts people at great risk of being either under or close to the Federal Poverty Level.8 The average median household income of the area is lower than the state and national averages, as show in Figure 16.9 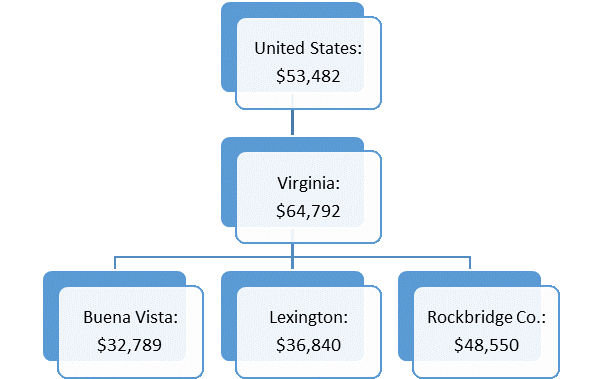 Of all Virginians who are not employed but are actively looking for work, only 22% received unemployment insurance, placing Virginia at the second lowest rate in the country.11 The Federal-State Unemployment Insurance Program provides unemployment benefits to "eligible workers who become unemployed through no fault of their own and meet certain other eligibility requirements."12 In Virginia, the unemployed must also meet additional criteria such as asset tests, separation qualifications, and weekly re-certification of eligibility,13 which can pose as deterrents to obtaining unemployment insurance.

1 out of 9 Virginians are immigrants.14 While data are limited, anecdotal evidence from community stakeholders suggests that the local immigrant populations are small relative to other regions of Virginia, but growing. In the Rockbridge area, immigrants are primarily Spanish-speakers and have the biggest presence, in terms of proportion to the overall population, in Lexington.

The Immigrant Rights Clinic at the Washington and Lee School of Law provides legal representation to non-citizen clients in immigration matters, focusing on removal proceedings with a particular emphasis on vulnerable populations, including refugees, unaccompanied minors, and victims of domestic violence.17 The closest nonprofit organization that aids in the legal documentation application process is in Harrisonburg. Although families in financial need have mostly characterized participation in such programs, it is important to remember that these services are open to all immigrant families, regardless of financial status.

Rockbridge residents commonly regard transportation as a prominent problem, particularly for those trying to access health care or employment. Over 11.5% and 7.5% of individuals in Buena Vista and Lexington do not have access to a private motor vehicle respectively, compared to 6.4% of individuals in Virginia.18 These higher percentages may be due to the convenient walkability of the two cities.

Those without access to personal transportation must rely on other services. This becomes a challenge because public transportation services in the area are limited. An individual's ability to affordably transport themselves determines their ability to maintain secure employment.19 The problem is further complicated when individuals look for alternative, cheaper housing away from cities, which are the area's employment hub.20 In areas where public transportation is nonexistent or insufficient, the more vulnerable populations such as the elderly, people with disabilities, and youth, may find themselves in involuntary social isolation and with diminished access to resources and social programs.

In the area there two existing transportation systems: the Rockbridge Area Transportation System (RATS) and the Maury Express. RATS is a United Way agency that transports people to and from appointments, workplaces, shopping centers, and social gatherings. Their buses operate five days a week based on demand and typically require reservations made two days in advance. Although RATS is supported by grants from the local government and the community, passengers are charged based on length of trip and income.21

The Maury Express is more flexible, operating six days a week and stopping at 35 scheduled stops on a fixed route between Lexington and Buena Vista (including important retail and service locations like Kroger, Goodwill, Rockbridge Area Health Center, Dabney Lancaster Community College, and the Senior Center).22 The cost is also minimal at $0.50 per trip.23 However, the entire route takes about two hours and is geographically-constrained, leaving out much of the County. In addition, the Maury Express only operates during the normal workday hours (8am-6pm). Facing a difficult situation, many Rockbridge residents resourcefully turn to and depend on an informal transportation system supported by friends and families.24