Dean Rodocker is the primary resource for new undergraduate students from the time they commit to attend W&L through the start of their sophomore year. Jason has worked at W&L for 10 years. He earned his Bachelor's degree from Hanover College, where he majored in Communication. He received his Master of Science in Higher Education and Student Affairs and Juris Doctor at Indiana University in Bloomington, Indiana. His responsibilities as Dean include coordinating summer communication, Leading Edge pre-orientation trips, First-Year housing, orientation week, academic advising, peer tutoring, First-Year Leadership Council (FYLC), extended orientation, Phi Eta Sigma honor society and other services and support for First-Years in promoting the University mission. Jason enjoys sports, the outdoors, and participating in a variety of athletic, recreational and community endeavors. 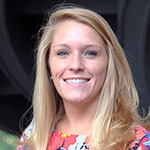 Dean Hobbs serves as the primary resource for sophomores, juniors, and transfer students. She focuses on developing partnerships and offering programs that will complement and enhance the college experience. She also meets regularly with students in a one-on-one setting and offers resource referrals to sophomores and juniors who may benefit from additional connections across campus. Megan is originally from New Jersey, graduated from Elon University with a Bachelor of Arts in Strategic Communications and received her Masters of Education in Counseling Psychology at James Madison University. She has been at W&L for seven years and in addition to her work as a class dean, serves as co-director of the AIM initiative and co-adviser to the LEAD Program.

Tammi Simpson has transitioned from her role as the Dean of Juniors to the Dean of Seniors. In this position, Dean Simpson is committed to supporting seniors during a critical period in their college journey through engagement, programming, and resource referral. Dean Simpson collaborates with student affairs colleagues, as well as with faculty and staff in other departments to best serve students’ needs. She also serves as the administrator for student conduct at Washington and Lee, as well as the adviser for the Student Judicial Council. Additionally, Dean Simpson is an adviser to the Student Association for Black Unity, and the Calyx yearbook staff. Prior to joining the Division of Student Affairs in December 2013, Dean Simpson worked for the U.S. Department of Justice for 15 years as a federal prosecutor in the Western District of Tennessee, Eastern Division; a Senior Trial Attorney in the Civil Rights Division; and an Attorney Advisor in the Department’s Office of Legislative Affairs. Before joining the Department of Justice, Dean Simpson was a staff attorney at Habitat for Humanity International, Inc., in Americus, Georgia, and later joined the District Attorney’s Office in Atlanta, Georgia, where she prosecuted felonies. She graduated from W&L in 1991 with a double major in political science and French. She received her Juris Doctor in 1994 from the University of Tennessee, College of Law, in Knoxville, Tennessee.