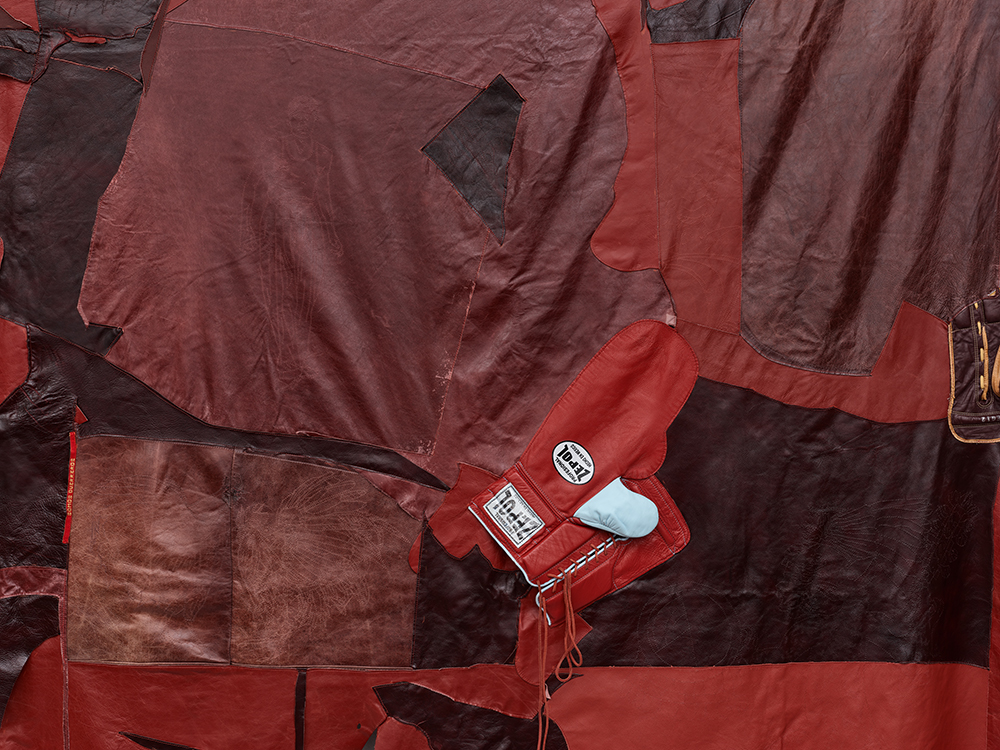 In his interdisciplinary works, artist Esteban Ramón Pérez often incorporates materials such as leather and embroidery, paying homage to his experience growing up in his father's upholstery shop. Drawing on his West Coast Chicanx experience, his practice can be seen as an expression of rasquache aesthetics, an approach to art-making based on a theory developed by Tomas Ybarra- Frausto to describe "an underdog perspective, a view from los de abajo [from below]." Pérez describes his work as "an interrogation and excavation of my subjective memory, spirituality, fragmented history, and social political reality."

Esteban Ramón Pérez earned a BFA in art from the California Institute of the Arts (CalArts), Valencia, in 2017, and an MFA in painting and printmaking from the Yale School of Art, New Haven, Connecticut, in 2019. His work has been included in numerous group exhibitions, including shows at Lehmann Maupin, Charles Moffett, Calderón, and James Cohan in New York; the Japanese American Cultural and Community Center and the Mistake Room in Los Angeles; the Art Gallery, Eastern Connecticut State University, in Willimantic, Connecticut, and elsewhere. In 2020, Pérez was selected for the prestigious NXTHVN Fellowship Programin New Haven and he is a 2022 recipient of the Artadia Award, Los Angeles.

Marcela Guerrero is the Jennifer Rubio Associate Curator at the Whitney Museum of American Art, New York. This fall, the Whitney presents two projects curated by Guerrero, No Existe un Mundo Poshuracán: Puerto Rican Art in the Wake of Hurricane Maria, and Martine Gutierrez: Supremacy. From 2014 to 2017 she worked as Curatorial Fellow at the Hammer Museum in Los Angeles, where she was involved in the much-lauded exhibition Radical Women: Latin American Art, 1960-1985, organized as part of the Getty Foundation's Pacific Standard Time: LA/LA initiative and guest-curated by Cecilia Fajardo-Hill and Andrea Giunta. Prior to joining the Hammer, she worked in the Latin American and Latino art department at the Museum of Fine Arts, Houston, where she served as research coordinator for the International Center for the Arts of the Americas. Guerrero's writing has appeared in several exhibition catalogues and in art journals such as caa.reviews, ArtNexus, Caribbean Intransit: The Arts Journal, Gulf Coast: A Journal of Literature and Fine Arts, Interventions: International Journal of Postcolonial Studies, and Diálogo. Born and raised in Puerto Rico, Guerrero holds a PhD in art history from the University of Wisconsin, Madison.