Gary Staab is a freelance artist and an expert in paleontology sculptures. His work has captured the Society of Vertebrate Paleontology's John J. Lanzendorf excellence award four times and his projects have appeared in over 30 different museums across the world. Visitors to the Indianapolis Children's Museum will note one of Gary's largest sculptures, a 75-foot long, 50-foot-tall Brachiosaurus, peeking through the museum's glass walls. His more recent work includes a replica of Ötzi, the 5,000-year old "Iceman" discovered on the Italy-Austria border. This work was commissioned by the Dolan DNA Learning Center and is documented in a NOVA special, Iceman Reborn. In addition to his freelance work, Gary is a research associate with the Denver Museum of Nature and Science and an honorary affiliate faculty at Idaho State University. A graduate of Hastings College, Gary completed a flexible degree program that combined practical museum experience with studies in art and biology.

Join Gary at the keynote luncheon on Saturday, March 16, from 12:00-2:00pm in Evans Hall, where he will be presenting "Digital Dinosaurs: Fleshing out the Past".

Register for the keynote luncheon 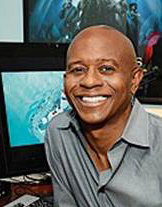 Marlon West is Head of Effects Animation at Walt Disney Animation Studios. He has had an extraordinary career in both 2D and computer graphics animation, including serving as Head of Effects Animation on Frozen, which received the Academy Award for Best Animated Feature, and Moana, which was nominated for the Academy Award for Best Animated Feature and won the award for "Outstanding Achievement, Animated Effects in an Animated Production" at the IFSA's 44th Annie Awards. West also worked on two Academy Award winning shorts, Feast, for which West served as Head of Effects Animation, and Paperman. Additional credits include Head of Effects on Atlantis: The Lost Empire and Home on the Range, Effects Animation Supervisor on The Princess and the Frog, Visual Effects Supervisor on Winnie the Pooh (2011) and Assistant Effects Supervisor on the "Rhapsody in Blue" sequence of Fantasia/2000. West started his career at Walt Disney Animation Studios in 1993 as an effects animator on The Lion King (his task was to add the dust cloud effects to the famous wildebeest stampede scene), and he went on to work on effects animation in numerous beloved features including Pocahontas, Hunchback of Notre Dame, Hercules, Mulan, Tarzan, and The Emperor's New Groove. On Pocahontas, among other things, West designed and animated the effects for Grandmother Willow, Pocahontas's aged advisor.