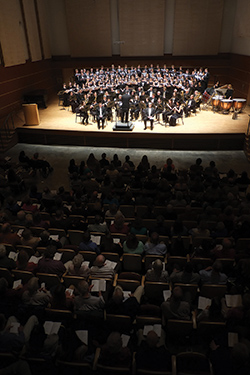 The Washington and Lee University Music Department's student choral groups — the Men's Glee Club, Cantarici, and the combined choirs of the choral program — present their Winter Concert. The concert will feature a first set of early modern English music and songs from Shakespeare, as well as a performance of Beethoven's Choral Fantasy, Opus 80, with guest pianist Jonathan Cook.

The performance will be held on Tuesday, March 22, 2016 at 8 p.m. in the Wilson Concert Hall of the Lenfest Center on the campus of Washington and Lee University in Lexington, VA. Tickets are free, but required.