Believe None of Us November 1, 2015: Johnson Theater, Lenfest Center 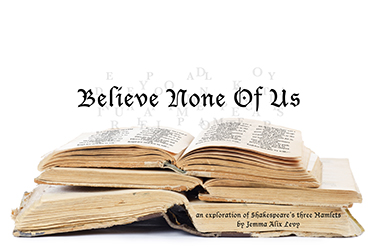 W&L Theater Professor, Jemma Alix Levy, presents her original adaptation of Shakespeare's Hamlet, entitled Believe None of Us. The play looks at how the character of Hamlet differs in each of the three "original" texts of the play (the 1603 First Quarto, the 1604 Second Quarto, and the 1623 First Folio) by putting the three Hamlets in conversation with each other. The cast will include professional actors from London, New York, Glasgow, and Staunton, Va.

The play will be held on Sunday, November 1, 2015 at 3 p.m. in the Johnson Theater of the Lenfest Center at Washington and Lee University in Lexington, Va. Tickets are free, but required.