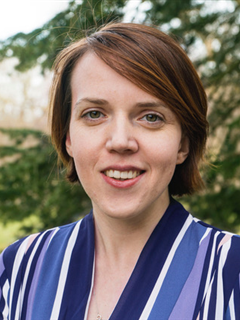 Prof. Atanasovsa is a scholar of Islamic Intellectual history whose research focuses on the intersections of Sufism (Islamic mysticism) and politics in the early-modern period (1500-1800 CE). She is currently hard at work on her first book, Sufism and Power: Constructions of Authority in the Ottoman Early Modernity, which examines how prolific author Ismail Hakki Bursevi (1653-1725) deploys Sufi concepts, methods, and institutions, to defend his authority in an increasingly competitive market of religious ideas.

Prof. Atanasova was previously Visiting Assistant Professor at Haverford College, where she taught courses on Sufism, gender and sexuality in Islam, and animals in religion.  Her upcoming courses at W&L include History of Islamic Civilzation, Sufism: Islamic Mysticism, and Islamic Law.

Prof. Atanasova received her PhD from the University of Pennsylvania and her B.A. from Mount Holyoke College.