New Courses Come discover what the Religion Department has for next year! 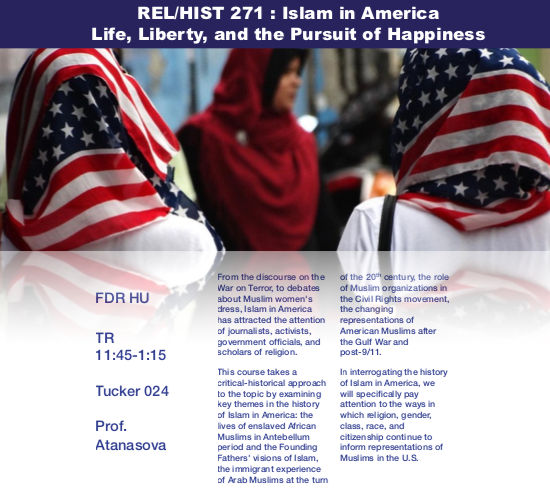 From the discourse on the War on Terror, to debates about Muslim women's dress, Islam in America has attracted the attention of journalists, activists, government officials, and scholars of religion.

This course takes a critical-historical approach to the topic by examining key themes in the history of Islam in America: the lives of enslaved African Muslims in Antebellum period and the Founding Fathers' visions of Islam, the immigrant experience of Arab Muslims at the turn of the 20th century, the role of Muslim organizations in the Civil Rights movement, the changing representations of American Muslims after the Gulf War and post-9/11.

In interrogating the history of Islam in America, we will specifically pay attention to the ways in which religion, gender, class, race, and citizenship continue to inform representations of Muslims in the U.S.