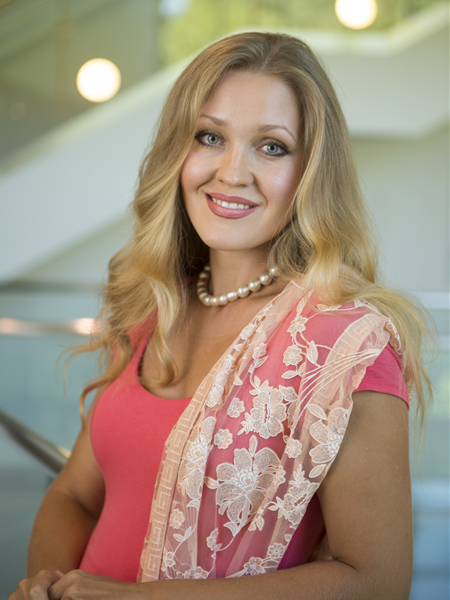 Anna Billias was trained as a concert pianist at the Prokofiev State Academy of Music in Donetsk, Ukraine (originally the Prokofiev Conservatory of Music) and graduated with advanced degrees in both performance and instruction for piano. During her school tenure, Anna performed with the school’s symphony orchestra, where she was a featured soloist and frequent accompanist throughout the Donetsk Oblast. Anna was invited to perform in Paris, France, for the International Music Forum in the fall of 1997, and was a prizewinner in the Prokofiev International Piano Competition in 1995, where she competed against pianists from across Europe. Anna received her D.M.A. in piano performance from Shenandoah Conservatory, Winchester, Virginia.

Mrs. Billias has performed in numerous concerts at Sweet Briar College, Hampden Sydney College, Lynchburg College, Liberty University, Randolph College, Shenandoah Conservatory, and James Madison University, and in London, England, Partenit, Russia, and Donetsk, Ukraine. She has performed in Lynchburg for fundraising events for the Forte Chamber Music Festival, Opera on the James and for the Lynchburg Symphony Orchestra. Anna has been invited to judge CVMTA competitions, and is a frequent jurist for musical events in Amherst, Lynchburg and Charlottesville. In 2010, she premiered a performance of Joelle Wallach’s “Daughters of Silence.”

Anna is currently an Assistant Professor and the Director of Piano Studies and Collaborative Performance at Sweet Briar College. In her spare time, she is the music director at a local church and runs a growing private piano studio. She is also the proud mother of three musically gifted children and her husband, Chris, is a criminal prosecutor and occasional dance performer in Lexington, Virginia.