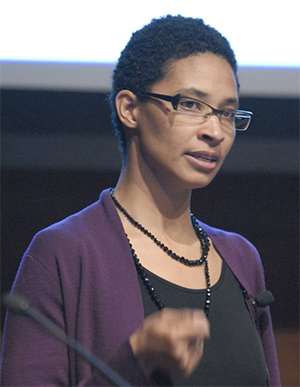 Danielle Allen is Professor of Government and Director of the Edmond J. Safra Center for Ethics at Harvard University. Prior to becoming the Director of the Safra Center in July of 2015, she was the UPS Foundation Professor of Social Science at the Institute for Advanced Study in Princeton, New Jersey. She is a political theorist who has published broadly in democratic theory, political sociology, and the history of political thought. Widely known for her work on justice and citizenship in both ancient Athens and modern America, Allen is the author of The World of Prometheus: the Politics of Punishing in Democratic Athens (2000), Talking to Strangers: Anxieties of Citizenship since Brown vs. the Board of Education (2004), Why Plato Wrote (2010), and Our Declaration: A Reading of the Declaration of Independence in Defense of Equality (2014). She is co-editor (with Rob Reich) of the award-winning Education, Justice, and Democracy (2013) and From Voice to Influence: Understanding Citizenship in the Digital Age (forthcoming, with Jennifer Light). In 2002 she was awarded a MacArthur Fellowship for her "ability to combine the classicist's careful attention to texts and language with the political theorist's sophisticated and informed engagement." Allen is a frequent public lecturer and regular guest on public radio affiliates to discuss issues of citizenship and education policy, as well as a contributor on similar subjects to the Washington Post, Boston Review, Democracy, Cabinet, and The Nation.