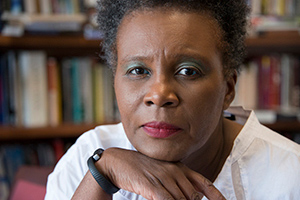 Born in Kingston, Jamaica, and educated at Williams College and Columbia University, Claudia Rankine is the author of five collections of poetry, a play, numerous video collaborations, and is the editor of several anthologies.

Rankine's critically acclaimed book, Citizen: An American Lyric (Graywolf, 2014), uses poetry, essay, cultural criticism, and visual images, to explore what it means to be an American citizen in a "post-racial" society. A defining text for our time, Citizen was the winner of the PEN Open Book Award and National Book Critics Circle Award for Poetry-it was also a finalist in the criticism category, making it the first book in the award's history to be a double nominee. Citizen also won the NAACP Image Award and the LA Times Book Award for poetry. A finalist for the National Book Award, Citizen also holds the distinction of being the only poetry book to be a New York Times bestseller in the nonfiction category, and it was selected as an NPR Best Book of 2014.

Rankine is the author of four other award-winning collections of poetry: Don't Let Me Be Lonely (2004), Nothing in Nature is Private (1994), The End of the Alphabet (1998), and Plot (2001). She has also edited numerous anthologies, including American Women Poets in the Twenty-First Century: Where Lyric Meets Language (Wesleyan University Press, 2002) and American Poets in the Twenty-First Century: The New Poetics (Wesleyan University Press, 2007). Her plays include Provenance of Beauty: A South Bronx Travelogue, commissioned by the Foundry Theatre and Existing Conditions, co-authored with Casey Llewellyn. She has also produced a number of videos in collaboration with John Lucas, including Situation One.

In 2014, Rankine was awarded Poets & Writers' Jackson Poetry Prize, awarded to an American poet of exceptional talent who deserves wider recognition. In 2013, she was elected a Chancellor of the Academy of American Poets. Other honors include fellowships from the Lannan Foundation and the National Endowments for the Arts. In 2005, Rankine was awarded the Academy Fellowship for distinguished poetic achievement by the Academy of American Poets.

Rankine is currently the Aerol Arnold Chair of English at the University of Southern California.