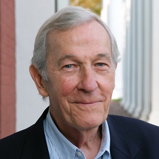 Washington and Lee University mourns the passing of Roger Mudd '50, the award-winning journalist whose generous gift endowed The Roger Mudd Center for Ethics in 2010. When he made his gift, Mudd said that "given the state of ethics in our current culture, this seems a fitting time to endow a center for the study of ethics, and my university is its fitting home."