A pro-solar Virginia law makes rural Rockbridge County an attractive location for solar panel arrays where cows now graze. But homeowners around a proposed site are pushing back, and county planning officials are getting the message. The future of utility-scale solar in pastoral Rockbridge may hang on how this skirmish is resolved.

The little town in the high north corner of Rockbridge County was known for its water. It sits on the headwaters of county’s beautiful Maury River and its mineral springs once drew the wealthy. But its Depression-era water system broke down this year, as it has before, and will again. With few resources and fewer than 400 residents, Goshen is looking for answers and isn’t sure where to look.

The stress of two years of Covid-19 made many from the D.C. area look for calmer and safer places to live. They were working from home anyway. Since good broadband was now available in most of rural Rockbridge County, many discovered the pleasures of owning a house here. Prices seemed low to them, but they are helping make the area a very hot housing market.

Poverty rates in Rockbridge County's cities and towns are higher than the national average, and most of the county is defined as a rural food desert. That means people are low income and lack access to affordable and nutritious food. It also means that over one-third of residents live more than 10 miles from the nearest grocery store. 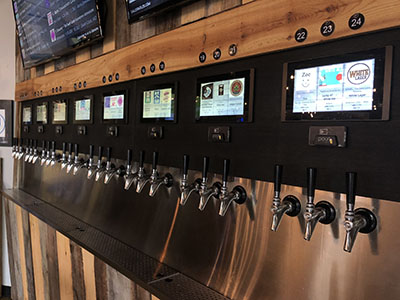 Business is Brewing in Rockbridge

In Virginia, people are continuing to jump into the brewing business because they believe it's easy, exciting and profitable. But there are challenges facing veteran and novice brewers, including a small and hard-to-please consumer base, deceptively long hours and complex state regulations.

The Jordan's Point Dam on the Maury River once symbolized Lexington's historic past, but it also threatened the city's financial future. The state forced the issue, demanding that the city decide whether to repair the deteriorating dam—or remove it. The debate splintered the community.

Young farmers face numerous obstacles in making their dreams come true. Land available for sale or lease is scarce in Rockbridge County. It's also expensive. Once farmers acquire land, they must deal with financial hurdles in securing funding for equipment, animals, feed and the technology required to run a successful farm. Aspiring farmers also must wait to get their starts because older, more established farmers aren't ready to relinquish control.

Refugees in the Valley

All refugees are immigrants, but not all immigrants are refugees. The United Nations defines refugees as people with a "well-founded fear" that they will face religious, ethnic, racial or social persecution should they return to their home countries. Two agencies serve the Shenandoah Valley, helping refugees resettle and make new lives for themselves, mainly in Harrisonburg and Roanoke.

Over the past four decades, elected officials and business owners boasted that they were going to save Buena Vista, the eighth-most fiscally stressed locality in Virginia, according to the state's Commission on Local Government. But disasters, both natural and man-made, have driven industries and businesses away. A developer is giving BV hope, again.