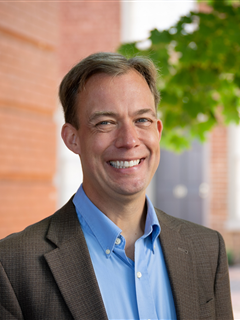 Professor Walters worked in journalism for 15 years before entering academia in 2014, first at two local newspapers and then as a reporter and editor for The Associated Press in Philadelphia. At the AP, Walters spent more than a decade covering state, local and national government, as well as beats that included law enforcement, gambling, transportaton, and coverage of breaking news. As an editor, he helped plan multiplatform daily news coverage across Pennsylvania, coordinating with regional, national and international editing desks across the AP. After leaving the AP, Walters spent eight years teaching journalism and mass communicaton courses at Kutztown University in eastern Pennsylvania, where he also advised the student newspaper and chaired the Student Media Advisory Board. In May 2022, he earned his Ph.D. in Media & Communication from Temple University, where he completed a dissertation on how diverse kinds of journalistic collaborations are changing the field. He started at W&L in July 2022.