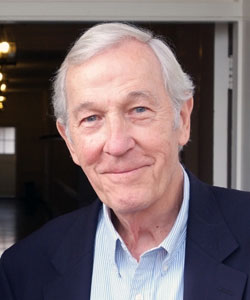 Acclaimed journalist and newsman Roger Mudd, a 1950 graduate of Washington and Lee University, donated his papers to the university's Leyburn Library in spring 2010. This gift follows Mudd's 2006 donation of his collection of 20th-century Southern fiction.

The Mudd papers, which occupy 14 boxes and approximately 15 linear feet of shelving, document the acclaimed journalist's career at CBS and NBC, as well as his work with the History Channel and on the PBS "Newshour" (1987-1993).

The papers contain many records of his connections with Washington and Lee, such as a tape of his 1995 Telford Lecture at W&L, notes and tapes from journalism courses he has taught at the University, and several term papers dating from his years as a student.

Among the rich resources in the Mudd donation are tapes of broadcasts on CBS and NBC, transcripts of Mudd interviews from 1967-2004 (broadcast on CBS, NBC, PBS and the History Channel), speeches Mudd gave from 1980-2004, and notes and sources for his 2008 book, The Place to Be: Washington, CBS, and the Glory Days of Television News.

Interesting political artifacts include Mudd's interviews with the late Sen. Edward Kennedy (1979), campaign advertisements from LBJ to Bush/Dukakis (1988), and a series of gaffes from presidential debates from 1976-1988. Many newspaper clippings on Mudd's work and related subjects are also present.