"There is a natural history of the newspaper; the development of the American journalistic tradition over 275 years is related to the political, social, and economic progress of our people.... Not all are large and famous, but all have a story to tell of a moment in the life of the United States." 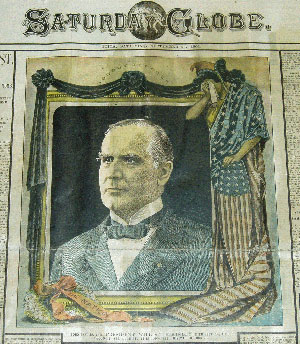 The Farrar Collection of Historical Newspapers is a rich archive of some 1,500 original historical newspapers. These newspapers, donated to Washington and Lee University by an alumnus who spent decades acquiring them, come primarily from colonial, Early Republic and Victorian-era America, but also from England and France. The American Revolution and Civil War are especially well represented, from both sides of these conflicts.

Frederic B. Farrar, a W&L graduate of 1941, also donated a portfolio of newspapers giving election-day results from every presidential race in U.S. history -- from Washington's first election to George W. Bush's re-election. Additional donations, including 18th century English periodicals, continued to be made by Farrar up until the week before his death in July 2014.