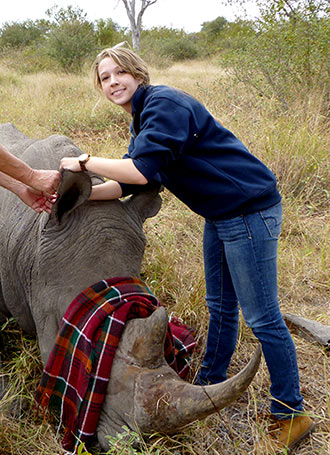 Why did you apply for the Johnson Opportunity Grant? I've been generally interested in veterinary medicine for a long time, and was curious to learn more about wildlife veterinary medicine in particular. I knew that participating in a pre-veterinary course in South Africa would not only better prepare me for a future in veterinary medicine, but would also allow me to experience first-hand many of the things that I have learned in classes such as conservation genetics.

How does your work under the grant apply to your studies at W&L? Through classes such as conservation genetics, I've learned about some of the more prevalent genetic diseases that plague some of South Africa's wildlife. The cheetah, in particular, has suffered many of these due to small population sizes and extensive inbreeding. While in South Africa, I worked closely with a cheetah that had been born with extra toes due to this inbreeding; we surgically removed these extra toes to prevent future infection. Being able to see the repercussions of something that I had learned about in class truly underlined the importance of my courses at Washington and Lee.

What was the most unexpected aspect of your grant experience? I didn't anticipate how quickly I would grow to love South Africa in all of its facets. It is an incredible country and I hope to go back and visit someday!

Post-Graduation Plans: I will be attending veterinary school in the fall.

Why did you choose W&L? I loved the small class sizes and the historic campus.

The helicopter roared to life, the blades blurring into one semi-solid arc as the body of the machine lifted into the air. I tightly clutched the armrests within the helicopter as I quickly vacillated between fear and excitement; without any doors, it was all too easy to imagine falling out of the machine. As we approached the elephant herd, my trepidation vanished. Even from several hundred feet up they appeared massive, crashing through the South African landscape as they attempted to evade the helicopter. Within time, we separated the main herd from the matriarch, allowing the veterinarian to sink a tranquilizing dart into the lone elephant's side. We waited anxiously for it to take effect before landing the helicopter and placing a gargantuan tracking collar on the animal's neck to track the movement of the herd. After administering antibiotics and a liberal amount of drug reversal, we stood back as the elephant clambered to her feet and meandered off into a copse of acacia trees. This was the beginning of a typical morning during my adventure in South Africa.

The house where I was staying in Hoedspruit, South Africa filled with a plethora of noises as the sun rose languidly over Lion's Head Mountain. By 7:00 a.m., the cacophony produced by the farm horses and African wildlife had woken me up, giving me enough time to eat breakfast with my homestay family before heading to the local veterinary clinic. Located in the middle of the town, the practice saw a menagerie's worth of animals daily. Early mornings were generally devoted to routine procedures such as cat and dog spays and neuters, where I assisted in prepping and restraining the oftentimes intractable patients. The afternoons of my stay were infinitely more variable. We would frequently receive calls to treat animals in the game reserves bordering Kruger National Park, often driving several hours down bumpy dirt roads to reach them. From rhinoceros horn chipping and DNA testing, lioness spays to sable antelope wrangling, each day gave me a fascinating glimpse into the realm of wildlife veterinary medicine. I learned quickly just how perilous the job could be, however. Near the middle of my stay, a rhinoceros that we were microchipping came out of her anesthesia early, advancing steadily towards the veterinarian and me before a safari car whisked us away to safety. Although she was most likely curious, it was still terrifying to see a 3000-pound creature stare us down. This trend continued when I was knocked down by a younger rhino later that day, and followed by a stunned lioness the following evening. Although frightening, these experiences underlined why I find the veterinary profession so fascinating—it is unpredictable and boundlessly exciting.

Although working closely with cheetahs, lions, and elephants was incredible, my time spent with the rhinos was by far the most rewarding aspect of my grant experience. To help put a stop to the rampant poaching seen in South Africa, veterinarians have begun to microchip and tag the rhinoceroses within Kruger National Park to curb illegal horn trading. While in Hoedspruit, I assisted the veterinarian with six of these procedures, and cleaned the bullet wounds of a poaching-attempt survivor. Watching how the entire Hoedspruit community rallied behind the veterinarians and helped raise money for anti-poaching efforts was heartwarming, and illuminated just how the veterinary profession is irrevocably tied to not just animals, but people as well.

The Johnson Opportunity Grant has given me so much more than a simple trip to South Africa. It has increased my self-confidence, my independence, and my adventurous spirit, and has, above all, strengthened my resolve to dive into the field of veterinary medicine. I feel incredibly fortunate to have been given this opportunity, and can't wait to use the information that I learned in my future endeavors.