The W&L Senshin'an Tea Room is a masterpiece of traditional Japanese architectural design and artisanship. It incorporates both formal shoin -style elements, based on the design of a study or library in a Buddhist temple, as well as the sukiya elements of a humble cottage.

The main alcove pillar, or tokobashira, is white cedar. Tea room architect Seiji Suzuki selected the tree from a New Hampshire forest and cut it down himself. The horizontal beam at the base of the alcove is rosewood.

The circular window of the tea room is not designed for looking outward. It is kept shut so that guests focus inward and ultimately reflect on their own state of mind. Zen scrolls often depict the mind with a circle written in one brush stroke. The subdued light in a tearoom lends itself to contemplation.

The shjōi doors are lattice frame sliding doors covered with translucent paper. They are very fragile and should not be touched. The paper filters the light and there is interplay between light and shadow.

The shitaji mado, or lattice window above the shōji doors reveals a rustic sensibility. The framework of the wall is left exposed, and the latticework is tied with wisteria vine or a simple cord.

The interior sliding doors to the right, called fusuma, are constructed by pasting opaquepaper over a wooden frame. In Japan, such doors can be removed to make a room larger. The pattern stenciled on the paper is called go san kiri, or five-three paulownia.

The tea room floor is covered with tatami. These mats are crafted by covering a thick base of rice straw with a woven rush of candlewick grass. The word tatami comes from tatamu, "to fold." In the classical period, tatami were thin and easily folded for moving about. Thicker mats were made to elevate persons of higher status and placed in certain areas of a room. Over time, the shoin style used thick mats to cover the entire floor.

Our tea room is a rokujō or six-mat tearoom. The size of a tatami, believed to approximate the space taken up by a sleeping person, continues to be the standard unit of measure for room size, even for contemporary rooms with wall-to-wall carpeting. The three styles of tatami-Kyoto, Nagoya and Edo-differ slightly in size. Our tearoom features the Kyoto tatami, which measures 6'3" by 3'1". It is considered the most appropriate size for the practice of tea.

The proper way to sit on tatami is on one's heels. Architecture is changing in Japan, so young people are unaccustomed to sitting in this manner, but tradition still requires it. With practice, many find that this position stabilizes and centers the body in preparation for an artistic activity or martial art practice.

The month of November is a time for celebration in the tea world. It symbolizes a new tea year as the tea leaves, carefully picked in May and stored away in jars, are now used. As the weather turns colder, the hearth in the tea room is opened. A special tatami is laid, which is cut to reveal a sunken hearth with kettle at floor level. This open hearth, adopted from the large hearths found in the homes of Japanese farmers, gives off more heat and lends an air of intimacy. During the warmer months, the sunken hearth is covered and a brazier placed on the tatami holds the kettle.

The alcove, or tokonoma, is slightly elevated above the tea room floor and may originally have been used to seat someone of high rank. In the medieval age, the alcove became a sacred space to display a scroll with calligraphy or a simple flower arrangement. In a formal tea gathering, the scroll offers a profound message upon which guests may meditate; the natural flower arrangement reflects the pure spirit of the host. 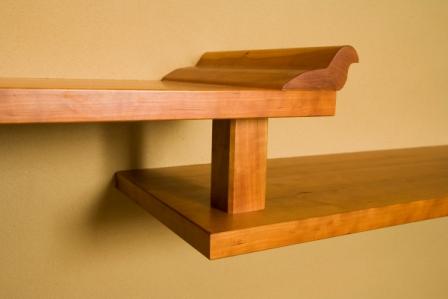 The uneven and staggered cherrywood shelves in the tokonoma display porcelains from the Reeves Collection. In medieval Japan, the shelves often held writing implements and Buddhist scripture. A dove-shaped piece of wood curves upward at the end of the shelf. This traditional architectural detail prevents a writing brush from rolling off the shelf. The recessed hardware details in the cabinets are in the shape of a chrysanthemum.

The tea room is a fragile work of art. It requires considerable care and delicate handling. Heavy jewelry, watches and such are never worn in the tea room, for they may scratch the wood or mats. Shoes are removed and feet should be covered. It is traditional in Japan to wear white socks. Hands are washed and clothing is clean so as not to harm the mats.
One moves quietly and deliberately in a tearoom constructed only of paper and wood. Those who are not trained in tea should first experience the room from outside. Breathe in the scent of the tatami, observe how light filters through the translucent paper, and notice the small details. Do you see that the shōji window and doors have been papered so that there is a noticeable seam? This fine detail is an aesthetic requirement for tearoom shōji.

Tea is a living tradition in Japan, rooted in the history and culture of the Japanese people. Both to complement its collections of Asian ceramic wares, and to support the study of East Asia at Washington and Lee, the Reeves Center for the Research and Exhibition of Porcelain and Paintings commissioned the building of an authentic Japanese tea room in its Watson Pavilion. The tea room, completed in July 2006, serves as a cultural lab for W&L students and a unique venue for public education about the history, philosophy and traditional arts of Japan.

Tea rooms in Japan are prized for their natural beauty and traditional artisanship. They are treasured from century to century for the legacy they provide each generation. Tradition is already an important part of the fabric that defines W&L's place in American history. The importance of continuity and the profound respect for tradition inherent in chanoyu resonates within our university community. 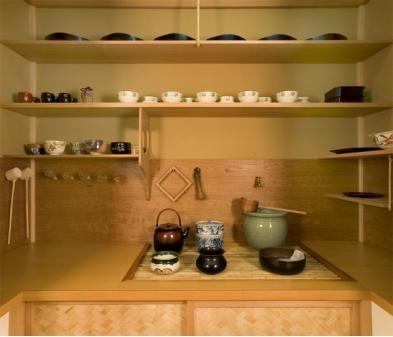 A traditional "mizuya" or preparation room
sits apart from the tearoom.