The Washington and Lee University Tea Room in the Watson Pavilion received the name "Senshin'an"（洗心庵）or "Clearing-the-Mind Abode" from Sen Genshitsu, the 15th-generation Grand Master of the Urasenke Tradition of Tea. President Ruscio, Dean Hank Dobin, Reeves Center Director Peter Grover, Ms. Kayoko Hirota from the Urasenke Chanoyu Center in New York, and other invited guests attended the unveiling and dedication. Along with special remarks from President Ruscio, Dean Dobin and Ms. Hirota, Erik Ball '09 returned to W&L to offer some thoughts of how the chanoyu course affected his life. 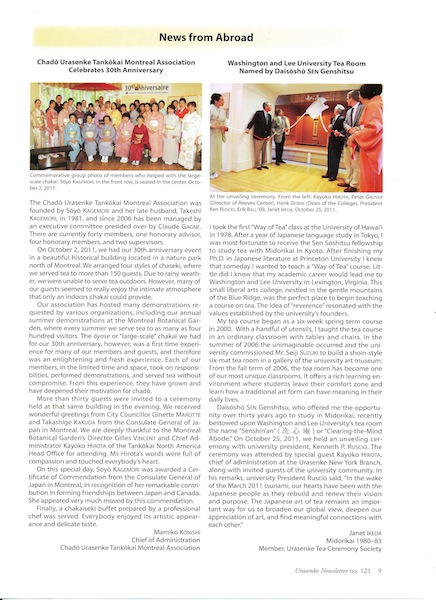 Posted on October 26, 2011 by Sarah Tschiggfrie

"Senshin'an" or "Clearing-the-Mind-Abode," was announced as the name of the Japanese Tea Room at Washington and Lee University in a dedication ceremony on Tuesday, Oct. 25, in the Reeves Center's Watson Pavilion. The ceremony was attended by special guest Kayoko Hirota, chief of administration at the Urasenke Chanoyu Center in New York, along with members of the W&L community.

After the tea room's name was unveiled on a plaque installed outside the tea room, students served traditional sweets and tea to the guests. "This is very much the protocol for this kind of simple ceremony," said Janet Ikeda, associate professor of Japanese in W&L's Department of East Asian Languages and Literatures.

The name "challenges us to dispel the distractions in our everyday lives," said Ikeda. "It is a wonderful name and a great phrase for today's students."

The tea room opened in a formal ceremony, but without a name, in February 2007. Ikeda explained that tea room names are special gifts, although there is very little written on the tradition. This name was a gift from Sen Genshitsu, the 15th-generation Grand Master of the Urasenke Tradition of Tea.

Ikeda said it was a special honor to receive a name chosen by someone of such high esteem. "His lineage goes back to the first generation in the 16th century and now, 400 years later, Sen Genshitsu is 88 years old and his son is currently the Grand Master," she said.

"I am delighted and am very grateful to him," she added. "I see this as recognition of our tea room and our efforts to have a university course on the Way of the Tea, which I teach in a cultural context. It gives the tea room a cultural and historical significance, and I see it as a lasting legacy that will outlive my time here. The name will stay with the tea room for ever."

Ikeda recalled that she had been a scholarship student of Sen Genshitsu. "I have kept contact with him over the years, sending reports and photographs. He's very proud of what I've done here."

Ikeda said that Sen Genshitsu spends much of his time offering tea ceremonies in the pursuit of peace and believes that something as simple as a bowl of tea can bring people together. He has made tea for world leaders and has spoken before audiences in more than 60 countries about achieving world peace by applying the wisdom of the Japanese tea ceremony.

In his remarks, W&L President Kenneth P. Ruscio said, "In the wake of the March 2011 tsunami, our hearts have been with the Japanese people as they rebuild and renew their vision and purpose. The Japanese art of tea remains an important way for us to broaden our global view, deepen our appreciation of art and find meaningful connections with each other."

The Urasenke School of Tea has been a leading advocate for the continuing relevance of the art form in the modern era, transforming it from a cultural practice with ancient roots unique to Japan into an international phenomenon with branches, chapters and study groups around the world.

W&L's Japanese Tea Room, or Clearing-the-Mind-Abode as it is now called, is used by W&L students learning the Way of the Tea as well as for outreach events.