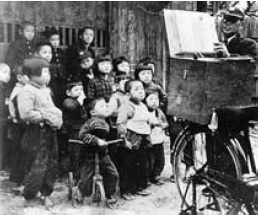 The Japanese tradition of storytelling with pictures dates back to 12th century Japan. During the Heian period, Buddhist monks used pictures to teach about the history of their temples and deities, probably to illiterate audiences.

The earliest predecessor to kamishibai is emaki, or “scroll picture.” A scroll was pulled across a screen, viewed by nobility as a form of entertainment in the 11th-12th centuries. The most famous was an emaki adaptation of the long work of fiction, The Tale of Genji.

The Gaitō Kamishibaiya, “kamishibai storyteller,” rode into a neighborhood with a stage hooked onto the back of his bicycle. Built into the stage was a chest of drawers to hold sweets—the kamishibai man was really a candy vendor.

After parking his bike, the storyteller pulled out his hyōshigi, wooden clappers he used to announce his presence, much like ice cream trucks today play music to alert customers. At the sound of the hyōshigi, children came running. The kamishibai man proceeded to sell candy to the children. Those who purchased the most were permitted to stand closest to the stage for the best view.

Kamishibai was hugely popular in Japan during the Showa era, what we know as post-depression Japan. There were some 25,000 gaitō kamishibaiya in the country—3,000 in Tokyo alone. But with the advent of television in 1953, kamishibai lost its audience.

Kamishibai did not altogether disappear—it took on new forms. One of the Japanese legendary superheroes, Golden Bat (Ōgon Bat), got his start as a kamishibai character. Installments of this popular series went on for 10 years! When the Golden Bat left the kamishibai stage, he leaped into the pages of graphic novels, having influenced Japanese manga comic book artists, and later, Japanese anime.

Today, kamishibai is enjoying a renaissance in Japan, and also in the U.S., where it has been introduced as a storytelling art. In fact, kamishibai has made it to the Internet, and now intergenerational kamishibai communities are popping up online. The storytellers are no longer candy men, but children and adults who create their own story boards and perform throughout Japan.

Students collectively produce a kamishibai story based on a classic Japanese folktale. After illustrating parts of the story, they gather to perform it.

What are some of the common elements in fairy and folktales around the world?

How do Japanese tales compare with the stories we know?

Type up the text of a Japanese folktale (e.g., Inch Boy or Peach Boy), or find a version online. Print 2 copies.

Cut apart one copy of the story into as many sections as you have students (or have two children illustrate each story part). Number each part. Put the uncut version aside.

Tea in a Box© 2007, Washington and Lee University