A Kamishibai written and illustrated by Tara McGowan 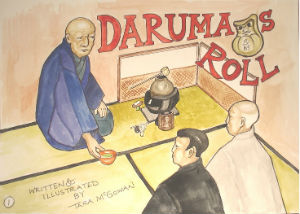 Long ago, in Japan, there lived an old man who liked nothing better than to invite his friends for the tea ceremony. (Pause). In those days, both men and women wore kimono, traditional robes that had no pockets.

Instead, men would carry small items in boxes called inro, held in place in their belts by netsuke beads. (Pointing to netsuke) The old man wore a netsuke of a daruma, the Buddha who sat in meditation so long his arms and legs became one with his body. (While pulling card) Daruma are symbols of patience but...

The old man was always impatient when everything was not just right. From his place in the old man's belt, the daruma netsuke could see the old man measure out just the right amount of tea and whisk it to a perfect froth.

He watched as the old man purified the tea container with his fukusa folded just so, but the daruma could sense that the old man's spirit was not in harmony and his mind was filled with distracting thoughts.

Behind the flower arrangement in the tokonoma that had been carefully prepared to reflect the season, the old man had placed a scroll with the sentiment, ichi go ichi e (performer points to each character) -"one meeting for all eternity." Since we may only meet each other once in this lifetime, we need to treasure each encounter as though it might be the last. This meant that the old man should have been thinking about his guests.

But the old man was so worried about having everything just right that he often forgot all about his guests. Had he put out the best sweets? Had he heated the water to the right temperature? Were his bowls and utensils fine enough? These thoughts crowded into his mind.

The netsuke could see that the old man had forgotten the real meaning of the tea ceremony, but how could he let him know? Sometimes the old man was so distracted he forgot other things too...

One day, when the old man was preparing tea for very special guests, the daruma netsuke noticed that he had forgotten the futaoki, the bamboo rest on which he would place the lid from the tea pot. Oh, how impatient and angry the old man would be with himself when he found out!

Soon, the old man would have to notice. As he took the scoop and transferred it to the other hand, he would look for the futaoki. What could the daruma do? Suddenly...

the futaoki would have stood! When the old man saw this he was amazed and delighted. "What a thoughtful little netsuke!" he cried, laughing at the coincidence. For the first time, he realized he had never felt this light of spirit when doing the tea ceremony before. He had been so impatient and distracted, he had not been thoughtful of his guests!

From that day on, he always kept his little daruma netsuke as a futaoki to remind himself that harmony in his heart and thinking of his guests was more important than all the perfection of his tea utensils or technique. (Pause) In this way, many years passed, but one day...

The daruma netsuke found himself in darkness. What had happened to the old man? Was he no longer useful? Why was he bumped about so, but never allowed to see the light of day? Sometimes he could see a thin streak of light, (pull card slightly out and then back in) but then he would be plunged into darkness again. In this way many, many years passed...Had his life with the old man been but a dream? (Pause) But one day, quite suddenly (pull card half way out quickly).

The lid opened and light streamed in. When the daruma netsuke's eyes adjusted to the light, he could see a woman's face, smiling down on him. "Why, what a beautifully carved little netsuke!" she cried. (Pull rest of card). "He must be very old. I wonder how long he has been stored away like this. I'll take him with me to show everyone."

Suddenly, the daruma netsuke was plunged into the soft darkness of the woman's pocket, but he struggled to peek out and what he saw was so strange and unfamiliar! Where was he? What the daruma netsuke didn't know was that he had not only traveled through more than a hundred years of time, but he had also traveled thousands of miles to a new country.

But, when the daruma netsuke managed to get out of the woman's pocket, he rolled koro, koro, koro, koro onto something very familiar indeed! It was a tatami mat, and he was in a tearoom! The woman was serving tea, just like his friend the old man had done, only she poured the water from the pot, instead of scooping it out. And her guests looked very different too! But what pleased the daruma netsuke the most was the feeling of harmony in the room! lchigo ichie--one meeting, one eternity-the daruma remembered.

From the carps pictured on the scroll and the irises in the flower-arrangement in
the tokonoma, the daruma netsuke knew it was Spring. Yes, through patience, he had
found his way home at last, and koro, koro, koro, koro, he rolled into the tokonoma to
watch the ceremony.