A lunch box in Japan is called a bento. It is divided into little sections for different parts of the meal. A traditional bento includes a healthy lunch of rice, cooked fish or meat, vegetables, pickles, and fruit.

Usually the mother packs the children’s bento with leftovers from the last night’s dinner. Some mothers are very creative. They arrange the food to look like flowers, dolls, animals and other objects. That makes them fun to eat. Many working adults also bring their lunch to work in bento boxes.

Imagine you are a child in Japan. Draw a picture of what you might find in your bento. 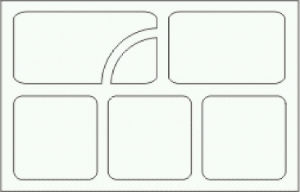 What foods did you put in the bento?

Students learn that bento, Japanese lunchboxes, are packed with healthy foods that mothers arrange in artistic ways. The students draw Japanese foods inside a drawing of a bento. They also draw pictures of a lunch they typically pack in their American lunchbox.

How is the food we eat a reflection of our culture?

Find examples of Japanese children’s bento online and save for overhead projection.

Photocopy A Japanese Lunchbox (AP #4) for each student.

Picture books and links about food in Japan:

Grades K-2: The Way We Do It in Japan by Geneva Cobb Iijima

(also by this author: Everybody Serves Soup and Everybody Brings Noodles)

Grades 2-3: How My Parents Learned to Eat by Ina R. Friedman

This link brings you to pages about bento on the Kids Web Japan site. There is a virtual bento box in which kids can arrange items by clicking and dragging them into the bento.

Tea in a Box© 2007, Washington and Lee University