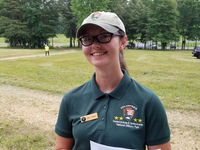 Why: Walking the battlefields while discussing and presenting on various commanders’ decisions in battle gave me a deeper understanding of the conflict and commanders’ resulting actions.

How did you get interested in Public History and the National Parks?

I began to Civil War reenact and volunteer on the artillery crews at Petersburg National Battlefield in high school where I began to appreciate educating the public about historical events and engaging people with the resources available at National Parks. After I took the Art of Command course and further engaged with National Military Parks utilized by the course, I interned at Fredericksburg and Spotsylvania National Military Park, which provided me the opportunity to professionally experience public history and the National Park Service.

What was the most surprising thing that happened to you this summer?

The most surprising thing that happened was that I had several people give strong emotional responses to the guided walking tour that I led of the Fredericksburg Battlefield.

What did you learn this summer?

Over the summer, I learned invaluable historical interpretation and research skills that are widely applicable. I also developed a passion for engaging the public with the resources available at National Parks, subsequently encouraging individuals to continue to learn.

Would you do it again? Why or Why Not?

I would do it again because the ability to encourage or spark an individual’s interest in history and help them make a connection to that history is extremely rewarding. These interactions, even though they may seem minute, can have a large impact on an individual, such as encouraging a child’s academic interests or helping an individual trace an ancestor’s journey to complete their family history.