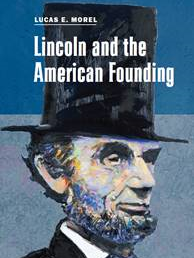 Professor Morel has taught at W&L since July 1999. He also teaches in the summer Master’s Program in American History and Government at Ashland University in Ohio; summer programs for the Claremont Institute for the Study of Statesmanship and Political Philosophy; and high school teacher workshops sponsored by the Ashbrook Center, the Gilder-Lehrman Institute, the Jack Miller Center, the Bill of Rights Institute, and the Liberty Fund.

In 2008-09, he was the Garwood Visiting Research Fellow at the James Madison Program in American Ideals and Institutions at Princeton University.

Prof. Morel is a trustee of the Supreme Court Historical Society, former president of the Abraham Lincoln Institute, a consultant on Library of Congress exhibits on Lincoln and the Civil War, and was a member of the scholarly board of advisors for the Abraham Lincoln Bicentennial Commission. He currently serves on the U.S. Semiquincentennial Commission, which will plan activities to commemorate the 250th anniversary of the founding of the United States of America. He has written for the Los Angeles Times, Christian Science Monitor, and Richmond Times-Dispatch.

Podcast: “What to the Slave is the Fourth of July?” National Constitution Center, “We the People” Podcast (with David Blight) (July 2020)