Meet with the program director(s) to hear more about the course. Please check this page for the breakout session schedule.

Applications open on October 9th and are due by 5:00 pm on Oct. 22, 2021. You may apply for up to two courses but please indicate clearly in the application questionnaire if it is your first or second choice.

AFCA/ENGL 286 – Black Writers and the Allure of Paris

FRANCE. Spend three weeks at W&L immersed in the literary works of black writers of the Harlem Renaissance and the mid-twentieth-century period. Then travel to Paris and dedicate two weeks to exploring the city that spurred black writers to examine modern racial identity.

THE NETHERLANDS. This course involves a survey of 17th-century Dutch history, art history, etc., which links the scientific analysis to the art and culture of the time.

ARTH 268 – Modern Art in Barcelona: From Gaudí to Dalí

SPAIN. Explore internationally renowned modern artists, architects, and designers who defined Spain's unique take on 20th-century art in two of the country's most colorful and cosmopolitan cities: Barcelona and Madrid.

DENMARK. The course uses corporate strategy as a means to explore the interplay between business, government, and the individual citizen as agents for social change. 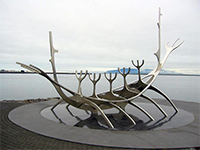 ICELAND. Cultural excursions throughout the country focus on the history, culture, geology, and economy of Iceland to better understand the significance of Iceland's shift to "extreme tech" to attain eco-sustainability.

CHINA: Chinese language and culture study for 4/6 weeks. The program is based in Shanghai, where students will learn the language in the morning and engage in various cultural activities in the afternoon. There’s a culture tour around the country during the last week.

ITALY: Grow familiar with the broad outlines of Roman history, the topography of ancient Rome, important archaeological sites in Naples, Herculaneum, Cumae, Misenum, and Pompeii, and features of the modern Roman city and Italian culture that have permitted so much of ancient Rome to survive to the present

UNITED KINGDOM. This class will travel to the center of European dance: London and Liverpool

ECON/EDUC 239 – Exploring Childhood in Scandinavia: Comparing Policies and Practices to the U.S.

SCANDINAVIA. This course exlores childhood in Scandinavia and the United States.

FRANCE. This course is taught entirely in the southern French city Toulouse and will use contemporary French cinema as a platform for discussion, debate, and advanced grammar review.

AUSTRIA. A cultural studies and German language immersion course based in Graz, Austria.

GERMANY. A literary-historical analysis of the many layers in Berlin’s rich history from 1848 to the present day coupled with an introduction to international business in the European Union with a focus on socially responsible businesses in Berlin.

HIST/LIT 295 – Slavery and Colonialism in the African Diaspora

This class will examine the impacts that colonialism and slavery have had on colonized peoples, as well as the linkages between African and Caribbean history.

JAPAN. Japanese language and culture study. Students will spend four weeks in Kanazawa studying Japanese in the morning and participating in cultural activities in the afternoon.

NETHERLANDS & UK. Explore how some of the greatest mathematical ideas had parallel developments in the world of art, all told through a narrative of culture and the history of ideas

MUS 238 – The Music, Folklore, and Literature of Ireland

IRELAND. This course will engage the music, folklore, and literature of Ireland and ways that the creation of these art forms is related to the places in which the art was created.

ITALY. Examine the nature of civic life in contemporary Italy, primarily through field study in Bologna.

COSTA RICA. intensive dive into Spanish vocabulary and grammar with visits to sites of cultural interest.

SPAN 213 – Seville and the Foundations of Spanish Civilization

SPAIN. This course immerses students in the culture of contemporary Seville while exploring its origins in the splendor of the art and literature of Early Spain.