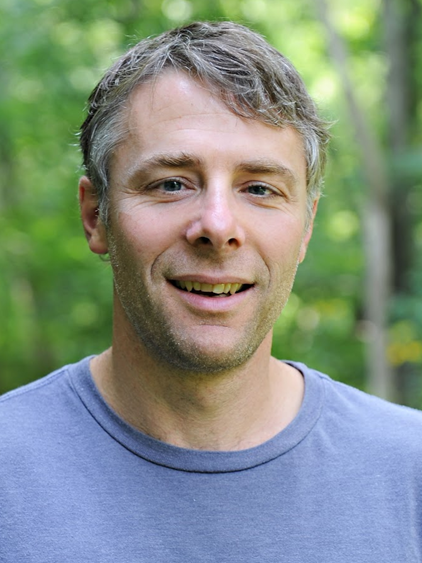 Effects of Climate Change on Endemic Mountaintop Salamanders
Virginia is home to several endemic salamanders that are restricted to tiny ranges on one or several mountaintops. My lab is studying several of these species in order to determine their biogeographic origins and their likely responses to climate change. With Big Levels Salamanders (just described in 2004!), we are examining the structure of contact zones with the more common Red-Backed Salamander, and we are using mitochondrial DNA to understand the evolutionary history of the two species. We are also studying the relative responses of Big Levels Salamanders and Red-Backed Salamanders to temperature fluctuations in order to predict the likely effects of climate warming on the interaction between the two species. With Peaks-of-Otter Salamanders, we are studying the factors that determine range limits and using genetic methods to examine population history.

Effects of roads and land use on frog and toad populations across the eastern and central U.S.
Numerous small-scale studies have investigated the various effects of roads and development on frog and toad populations. I am coordinating an NSF-sponsored project to examine these relationships more generally across a large swath of the eastern and central United States. Using data from the North American Amphibian Monitoring Program and public data on land use and wetland distributions, we are linking together undergraduate ecology and conservation biology courses to determine what kinds of land use are detrimental to amphibians, and where possible, why these land uses have the effects they do. This project is managed in collaboration with the National Center for Ecological Analysis and Synthesis.

Population Dynamics of Terrestrial Salamanders
Although terrestrial salamanders are among the most common vertebrates in Eastern forests, their fossorial lifestyle means that little is known about their life history. We are using a large mark-recapture dataset to examine the life history and population dynamics of these animals. We are asking questions about seasonal dynamics, size-dependent mortality and reproduction, and the costs and benefits of dispersal. We are then using this information to parameterize population models for terrestrial salamanders.

Statistics for Biology and Medicine (BIOL 201)

Marsh, D. M., Cosentino, B. J., Jones, K. S. et al. 2017. Effects of roads and land use on frog distributions across spatial scales and regions in the Eastern and Central United States. Diversity and Distributions, 23, 158-170.

Marsh, D. M. and Beckman, N. G.* 2004. Effects of forest roads on the abundance and activity of terrestrial salamanders in the Southern Appalachians. Ecological Applications 14:1882-1891.

Undergraduate Research and Education at NCEAS

During 2010-2011, I served as Undergraduate Education Advisor at the National Center for Ecological Analysis and Synthesis (NCEAS). Since then, I have continued to collaborate with NCEAS on projects that blend undergraduate research and education. Our current project "Roads, Toads, and Nodes" links undergraduate ecology and conservation biology classes in a collaborative study of the landscape ecology of amphibians in the Eastern and Central U.S. This project is funded by a TUES grant (Transforming Undergraduate Education in Science) from the National Science Foundation.