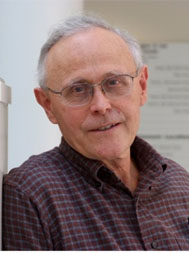 I am interested in describing and explaining patterns of plant distribution occurring in nature. For many years I have been studying Helenium virginicum, a rare plant that is globally limited in distribution to 30 sinkhole ponds in Augusta and Rockingham Counties, Virginia, and 30 wetlands in Missouri. Work in my lab helped to establish the distribution of this plant and provided some explanations for its rarity. The plant is now protected by the state of Virginia and the federal government's Endangered Species Act. Rarity seems to reflect tolerance by the plant of a rare habitat that offers relatively little competition because of the stressful combination of its soil chemistry and variable hydroperiod. Other factors that may contribute to the plant's rarity that we are studying are: a self-incompatible breeding system, special requirements for seed germination, and the extreme variability of the hydroperiod at the sinkhole ponds.
I am collaborating with a W&L colleague, molecular biologist, Dr. Maryanne Simurda, who is sequencing ITS regions of the nuclear DNA in an effort to determine the evolutionary history of H. virginicum in relation to its closest relatives. The final stage of this study has revealed that H. virginicum is a monophyletic taxon, distinct from other similar Helenium species, and that it has a remarkable disjunct distribution between Virginia and Missouri. We have found that the sister group to H. virginicum is a cluster of H. autumnale populations that grow on the Bruce Peninsula, Ontario, Canada.

In 2001 I began a long-term experiment in collaboration with colleagues (Drs. Hurd, and Hamilton) to study the question of whether decreasing the diversity of plant species living together in a community decreases resistance of that community to invasion. This is an important question today, at a time when alien species are seen as a threat to native species, and when the rate of species extinction is high, and so we are trying to understand the ramifications of these losses. The work is being carried out at a research site on campus where 66 plots each 3 m X 3 m in area have been sown with native plant species at three levels of diversity (3, 12, and 24 species). Over 15 years we shall be monitoring plots for evidence of differences in resistance to invasion, and seeking an understanding of the mechanisms responsible through the study of three trophic levels.