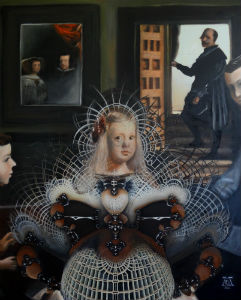 From 1971-75, artist Louis Markoya worked as a studio assistant for legendary Surrealist artist Salvador Dali. The experience had a profound effect and continues to influence his work, which he sees as an extension of Dali's vision. In a recent interview he explains, "I feel I have some unique opportunities in that I have known Dali and his love of science/technology well and can utilize some of these advances in artworks Dali may have done if he had the opportunity."  Drawing on his background in fractals and mathematics, Markoya begins his paintings digitally, working on the computer to visualize his ideas, which he then transfers to canvas where he often works in oil. Markoya has also created Surrealist inspired sculptures and has recently experimented with lenticular printing, which gives the illusion of depth as the image is viewed from different angles. The exhibition in Staniar Gallery will include original Dali works from Markoya's collection as well as a 3-D animation that will be simultaneously screened at both the gallery and W&L's IQ Center throughout the run of the show. Louis Markoya worked for over 35 years with developing technology in the field of semiconductor lithography. He consulted on projects for IBM, AT&T, and Intel and he holds over 30 U.S. patents. Recently retired, Markoya lives in Connecticut where he is exploring the creative applications of 3D fractals.