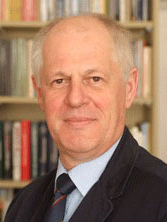 The William P. Ames Jr. Professorship was established in 2000 under the will of Mrs. Mary Farley Lee in honor and memory of her brother, a 1941 graduate of Washington and Lee University.