Reporting directly to the President, the committee's specific charge is to:

The University Committee on Inclusiveness and Campus Climate (UCICC) was created by President Ruscio in November of 2008. Since then the committee has met throughout each academic year and discussed a wide variety of issues. This year the committee focused on student issues related to diversity and climate (including religious life and sexual culture) and on Alumni Affairs. This annual report includes a summary of the topics the committee has discussed during the year; longitudinal measurements of diversity at Washington and Lee; and a summary of the recommendation submitted to President Ruscio during the period covered by this report.

The Committee on Inclusiveness and Campus Climate met eight (8) times in 2015-2016. Following is a recap of the topics that the committee discussed during this year.

UCICC members were invited to meet with the team from Storbeck/Pimentel to help them gain a deeper understanding of the university and to offer feedback on traits and characteristics the University would be seeking in the next president. The discussion focused on the qualities that make W&L unique as well as on some of the successes (Johnson Scholars and Questbridge) and the challenges we face in recruiting and retaining staff and faculty of color.

In this webinar, Dr. Cullen encouraged participants to consider the role and responsibility each of us has in creating a safe and secure campus environment for our students, staff and faculty. As we have seen, students of today are becoming more and more active in confronting these acts and often turn to professional staff and faculty (particularly those staff and faculty of color) for assistance and support. As a result, some of these staff and faculty members begin to feel underappreciated and burnt out. At the same time, staff and faculty of dominant identities are beginning to feel that potential pitfalls and landmines are inevitable, leaving them at a loss for how to best support their colleagues and students with target identities.

Dr. Cullen discussed communication traps and how to avoid them, and shared tools that can be used to help institutions maintain a community of respect and open dialogue, in spite of today's challenging social climate and growing tensions.

Following the Town Hall presentation of the Campus Climate survey results, Eileen joined the committee for a deeper dive into the data. The committee's discussion focused on some of the challenges the university faces when it comes to retention of diverse hires - the confederate flag controversy, our location, and disrespect experienced by women and faculty of color in the classroom. There was discussion about orientation programs for first year students and Marc Conner shared the information that Jason Rodocker had presented to UCICC in a prior year.

This meeting was devoted to a discussion of recent events on college campuses (including Central Missouri, Yale, Claremont McKenna and Amherst), as they relate to issues of campus climate, inclusiveness, diversity (issues that UCICC and others on campus have been working on for some time).

Committee members were asked to review the following documents in advance of the discussion: the demands and president's response from Amherst; the AAC&U statement on academic freedom; and a notable statement and discussion on understanding free speech that the faculty at the University of Chicago put together just last summer (2014) that focuses on a number of these pressing issues.

The committee had a very rich discussion about a variety of topics including the importance of academic freedom and free speech vs. creating a climate that is welcoming to all. Committee members talked at length about the tension between wanting to protect students from "microagressions" while giving them the tools they need to deal with these issues when they leave W&L.

After much discussion, the committee unanimously recommended adopting the University of Chicago's 2015 "Statement on Freedom of Expression" and the AAC&U 2006 "Statement on Academic Freedom and Educational Responsibility" as guiding documents for how we think about freedom of expression on our campus. Marc Conner wrote the following introduction which is included with the two documents on the Provost's website:

Washington and Lee University values the central importance of freedom of expression in a vibrant and intellectually challenging university community. Our commitment to honor, civility, and the free exchange of ideas defines who we are as an educational institution. These commitments often mean discomfort, challenge, and vigorous debate about ideas and the implications of ongoing thought and interpretation. We are committed to the civil and unfettered exchange of ideas, confident that a vibrant intellectual community can withstand disagreement and debate and find common ground even where we disagree.

In August 2013, President Ruscio established a special working group to examine the role of African Americans in the history of the University. In particular, the group was working on a memorialization project for Robinson Hall designed to recognize the enslaved people the University received in a bequest from "Jockey John" Robinson in 1826 and subsequently sold in 1836. Elizabeth Knapp, who chairs the group, spoke about the project, and shared copies of documents that included lists of those men and women who were bequeathed to the college by John Robinson.

Committee members were incredibly moved by the list of names and discussed the initial plans for the dedication. A recommendation was made that each name be read aloud as part of the ceremony. There was much discussion about the proposed marker and its location on the side of Robinson Hall which the working group hoped would be a place for reflection with benches and plantings (once the renovations to Tucker Hall are complete).

Many UCICC members attended the community open forum during which the plans were presented to the campus community and feedback was solicited as well as the dedication of the historical marker, "A Difficult, Yet Undeniable, History" which was held on April 5, 2016.

Sally Richmond was invited to meet with UCICC to talk about diversity and admissions. Sally led an engaging discussion in which she shared some of her perspectives on W&L Admissions and asked committee members to talk about how they define diversity and what they see as challenges to increasing diversity at W&L. Sally said that her charge is first and foremost to enhance diversity. Sally spoke about two upcoming projects - the first is to look at admissions' publications to be sure that we are sending the right messages about W&L to prospective students and parents. The second will look at the way we are distributing our financial aid budget to be sure it is being used strategically to recruit the students we want.

After the hateful vandalism attack that occurred on campus against a student, UCICC visited the LGBTQ Resource Center to meet with Rallie and to talk about the Center and the Resources available to LGBTQ students.

First Amy reported that President Ruscio had approved an update to the University's Nondiscrimination/EEO statement to clarify that the protected category of "sex" includes "gender identity" and "gender expression" and that the University's health insurance plan would be expanded to cover medically necessary services related to gender identity and gender transition effective July 1, 2016.

May 20, 2016 - Update from Sidney Evans on the Diversity Working Group

Sidney Evans, Vice President for Student Affairs and Dean of Students, was invited to meet with UCICC to give an update on the work of the Student Affairs Diversity Working Group. The discussion focused on several items the working group had identified as possible action items:

Sidney also talked about the bathroom initiative and the gender neutral bathrooms that have been created and identified around campus. There was also concern expressed about the high cost associated with joining a fraternity or sorority.

Committee members agreed that it would be good to have a joint meeting between the Diversity Working Group and UCICC in the fall.

Gender and Diversity in Faculty Hires

Each year UCICC reports information about the gender and diversity of those holding full-time faculty appointments at Washington and Lee and any changes over time.

*There were no tenure track hires in the Law School this year.

The chart below shows the percentages of men/women holding full-time faculty appointments by rank. In 2011 there were 37.9% women in all ranks; in 2015 that number is 38.2%. The percentage of women in each rank has grown over this period except in the Assistant level where the number has decreased from 47.1% in 2011 to 38.9% in 2015. This year the Assistant professor hires are 75% female so we hope to see a move in the opposite direction now. We speculate that partner/spouse constraints are a factor in this area. 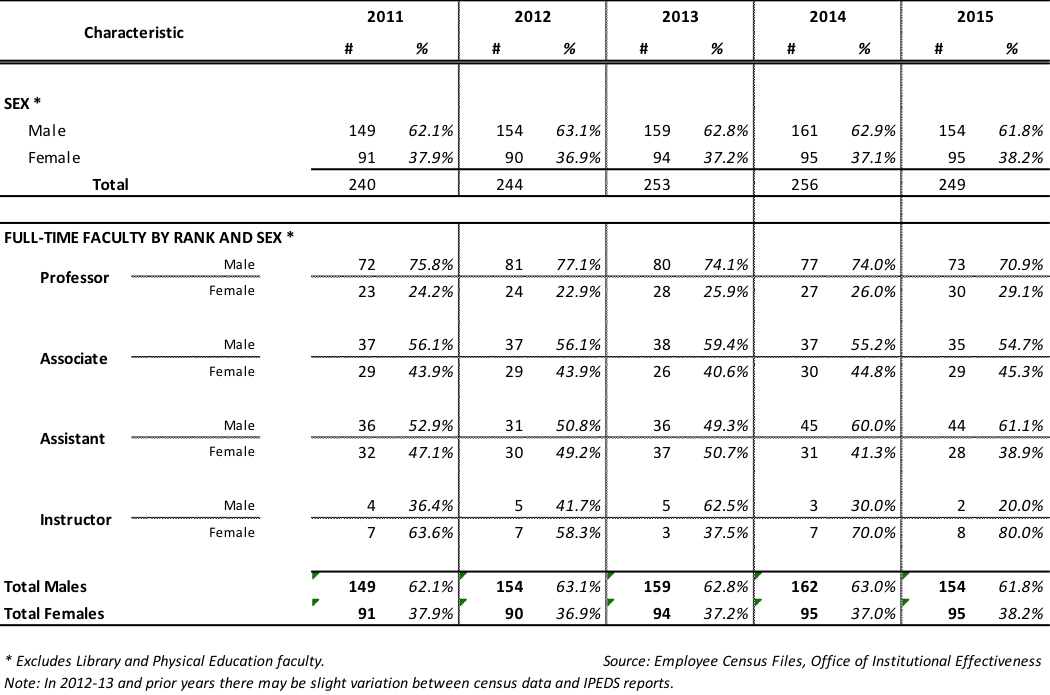 The following chart shows the race and ethnicity of the full-time faculty.

The Office of Human Resources tracks data on the percentages of women in non-faculty positions using the same IPEDS data that are used for faculty and included in the Fact Book.

The Office of Human Resources also tracks data on staff diversity using demographic information from our required IPEDS reporting (the same source used for the annual Fact Book). The following chart shows the numbers and percentages of staff of color by job category.

Diversity in the Student Population

Each year UCICC also provides information about the student population and its breakdown by self-reported racial and ethnic identifications. Additional information on student body characteristics is included in the Fact Book. 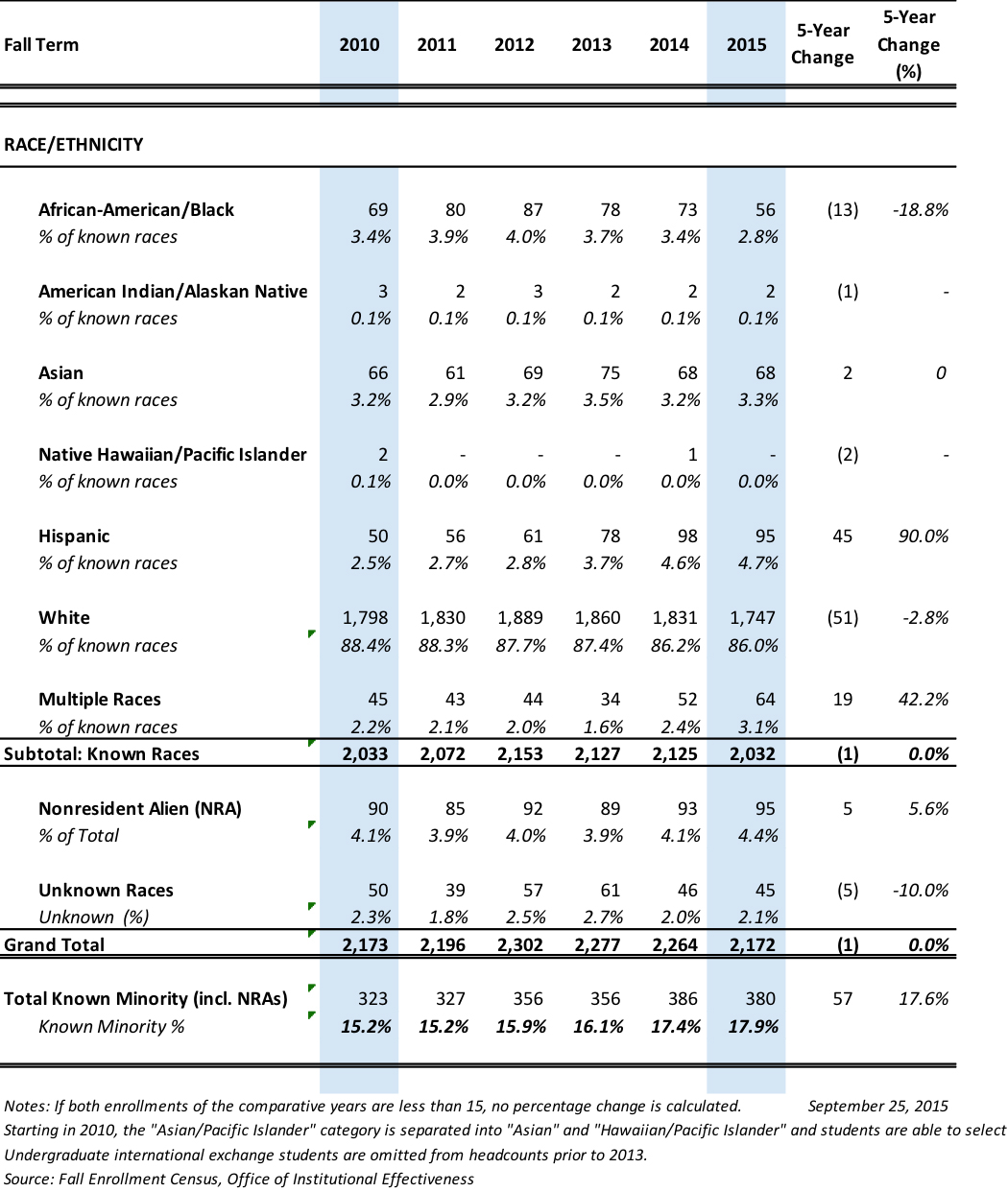 While the total number of minority students (including NRAs) has increased by 17.9% since 2009, it is disheartening to note that the number of African American/Black students has decreased by almost 19% (last year's 5 year change was -14%). Conversely, the number of Hispanic students has increased by 90% over this same period (75% last year). This year's admission numbers are encouraging and committee members are optimistic that the new Vice President for Admissions and Financial Aid will bring new strategies for multicultural recruiting.

As mentioned above, in its meeting on December 1, UCICC unanimously recommended adopting the University of Chicago's 2015 "Statement on Freedom of Expression" and the AAC&U 2006 "Statement on Academic Freedom and Educational Responsibility" as guiding documents for how we think about freedom of expression on our campus. The committee recommended that there be an introduction to these statements that presents them in the context of the University values of honor and civility. Marc Conner wrote the introduction which is included on the Provost's website:

Washington and Lee University values the central importance of freedom of expression in a vibrant and intellectually challenging university community. Our commitment to honor, civility, and the free exchange of ideas defines who we are as an educational institution. These commitments often mean discomfort, challenge, and vigorous debate about ideas and the implications of ongoing thought and interpretation. We are committed to the civil and unfettered exchange of ideas, confident that a vibrant intellectual community can withstand disagreement and debate and find common ground even where we disagree.