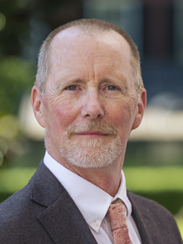 Prof. Rush’s scholarly interests are diverse. He has written extensively on U.S. politics, Constitutional Law in the United States and Canada, elections and democracy around the world, and global affairs. His writings have been published in numerous scholarly journals and in media outlets such as The Hill, The Washington Post, USA Today, The Christian Science Monitor, The Richmond Times and The Roanoke Times and NPR. From 2010-2013, he served as Dean of the College of Arts and Sciences at the American University of Sharjah in the United Arab Emirates. His current scholarly work and interests include presidential powers over foreign affairs, separation of powers, international politics, judicial activism, elections and democratic reform, civic education, higher education and law, and law and technology.

Prof. Rush is married to Florinda Ruiz, whom he met at Johns Hopkins. Dr. Ruiz directs the Writing Program at Washington and Lee and has worked extensively as a Professor of Spanish and professional translator. They have two sons, William and Alex, and a pup, Humphrey, who runs their lives.