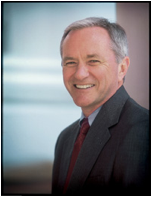 Kenneth P. Ruscio took office as the 26th president of Washington and Lee University on July 1, 2006. An alumnus of W&L and a distinguished scholar of democratic theory and public policy, President Ruscio previously served as the dean of the Jepson School of Leadership Studies at the University of Richmond from 2002 to 2006.

Ruscio held both faculty and staff positions at W&L from 1987 to 2002, including professor of politics, associate dean of the Williams School of Commerce, Economics, and Politics, and dean of freshmen. A postdoctoral research scholar at the University of California, Los Angeles, from 1983 to 1985, he also taught at Worcester Polytechnic Institute from 1985 to 1987 and at Kansas University from 1982 to 1983.

The year after Ruscio became president of W&L, the University launched an ambitious strategic plan emphasizing its commitment to a liberal arts education in the 21st century. The current $500 million capital campaign in support of the plan has so far resulted in substantial gifts for student financial aid, including $100 million for the Johnson Scholarship Program; for faculty support and academic programs, including $66 million from the Lenfest Challenge to improve faculty compensation and $4 million from award-winning journalist Roger Mudd to create the Roger Mudd Center for the Study of Professional Ethics. A $50 million renovation and restoration of the historic Colonnade is well underway, and a new athletic and recreation center, as well as enhancements to campus residences for students, are in the works. The University has also embarked upon initiatives in work-life balance and energy conservation, the latter as part of its commitment to sustainability.

President Ruscio guided the University through a revitalization of the Spring Term, a four-week academic term that offers intensive study for students and creative approaches to teaching for faculty. Also during his tenure, the W&L School of Law has implemented an innovative curriculum that prepares students for a rapidly changing profession.

Ruscio has authored articles, book reviews, essays, and the book, The Leadership Dilemma in Modern Democracy (2004). He has served as national president of Omicron Delta Kappa, the national leadership society begun at W&L in 1914 that now has chapters at more than 300 campuses. He has led and served on dozens of academic, professional and civic committees. Ruscio serves on the boards of the George C. Marshall Foundation and of the American Association of Colleges and Universities (AAC&U). In recognition of his scholarly and professional accomplishments, Washington and Lee's chapter of Phi Beta Kappa inducted Ruscio as an alumni member in 2008.

Ruscio is married to Kimberley O'Donnell Ruscio. They have a son, Matthew, who is a 2012 graduate of St. Lawrence University.

Senator Capito served as a member of the West Virginia House of Delegates for four years and then represented the second congressional district in the U.S. House of Representatives for 14 years before her election to the Senate in 2014. She is the first female U.S. senator in West Virginia's history and was elected with the largest margin of victory for a Republican in state history.
In the Senate, Capito serves on the Appropriations Committee, the Energy and Natural Resources Committee, the Environment and Public Works Committee, and the Rules and Administration Committee.

A lifelong West Virginian, Sen. Capito was born in Glen Dale in the Northern Panhandle. She holds a B.S. in Zoology from Duke University and a M.Ed. from the University of Virginia.

Capito has strong connections to W&L. Her sons Charles '07L and Moore '11L, as well as her daughter-in-law Katherine (Brings) Capito '11L, are graduates of W&L Law.

Secretary Holton is a former legal aid lawyer and a former juvenile and domestic relations district court judge. As Virginia's First Lady, she spearheaded a major reform of the foster-care system. She also has worked for the Annie E. Casey Foundation's Child Welfare Strategy Group and as the program director for Great Expectations, which helps youth in the foster-care system gain access to higher education. In 1970, as the daughter of then governor Linwood Holton (W&L Class of 1944), she and her family helped to integrate the Richmond public schools. She is the wife of current U.S. Senator Tim Kaine.

Lucy Wade Shapiro, 2014-15 President of the Executive Committee of the Student Body Lucy Wade Shapiro is a history major from Memphis, Tennessee. Lucy Wade has served on the Executive Committee for three years, including as first-year and sophomore class representative, and as president for the past year.She was inducted into Beta Beta Beta, the national biology honor society, and was involved in Women Interested in Technology and Science, Reformed University Fellowship, Peer Counselors, and Kappa Kappa Gamma sorority. In addition to her involvement on campus, Lucy Wade volunteered at the Rockbridge Area Health Center screening new patients who were seeking financial assistance.

After graduation, Lucy Wade will return to Memphis to participate in a one-year clinical fellowship program at the Church Health Center, a nationally regarded multispecialty medical clinic that provides health care for the working uninsured. Upon completion of this program, Lucy Wade plans to attend graduate school to become a physician's assistant and continue following her passion for community service.