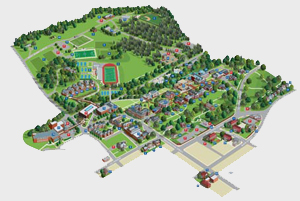 The Washington and Lee campus is renowned for its beauty, charm, and historical significance. In 1972, the front campus was designated a National Historic Landmark by the Department of the Interior, only the third college campus in the country to be so designated. The main campus consists of approximately 50 acres. In addition, W&L has about 40 acres of playing fields, 215 acres of unimproved land, and 17 acres in various sections of Lexington. Newly acquired property adjacent to the main campus includes Belfield (2.5 acres) and Peniel Farm (90 acres).

Lee Chapel, constructed under President Lee's supervision, faces the Colonnade. University events take place regularly in the 500-seat auditorium. Named a National Historic Landmark in 1961, the building includes the Lee family crypt and a state-of-the-art museum with exhibitions that trace the history and heritage of W&L.

Other principal buildings on the front campus are the Lee House, also built to Lee's specifications and five antebellum houses. The latter group includes the Lee-Jackson House, home to the Office of the Dean of The College; the Morris House, the University's guest house and seminar/reception center; the Reeves Center, which exhibits the university's important collection of ceramics; the Gilliam Admissions House; and the Hotchkiss Alumni House, a former faculty house renovated through the contributions of alumni).

Also located on the front campus is the Watson Pavilion, which houses an authentic Japanese tea room that is used as a classroom by the department of East Asian Languages and Literatures. Buildings on University Place (below Letcher Avenue) include the Center for International Education, the Financial Aid Office, and the offices of the Lee Chapel museum.

Buildings on the Stemmons Plaza include Huntley Hall, the James G. Leyburn Library, duPont Hall, Reid Hall, and the Science Addition along with Howe Hall and Parmly Hall science buildings. Between Huntley Hall and Graham-Lees Hall is Holekamp Hall, renovated in 2007.

Mattingly House, at the corner of Washington Street and Lee Avenue, is home to the Shepherd Program for the Interdisciplinary Study of Poverty and Human Capability and the Roger Mudd Center for the Study of Professional Ethics. Also on Washington Street is Hillel House, the center for Jewish life on campus and the location of the E-Café.

A little farther down Washington Street and on the far side of the campus green is the Francis P. Gaines Residence Hall, the University's other first-year residence. Woods Creek Apartments, located on the back campus, provide housing for upper division students. Across Nelson Street from Gaines Hall is the Lenfest Center for the Performing Arts, composed of Lenfest and Wilson Halls.

Sydney Lewis Hall, on the northern edge of the campus, houses the School of Law, which contains the archived papers of U.S. Supreme Court Justice Lewis F. Powell Jr. and the Wilbur F. Hall Law Library.

University Facilities administrative offices are located next to the maintenance complex on back campus.